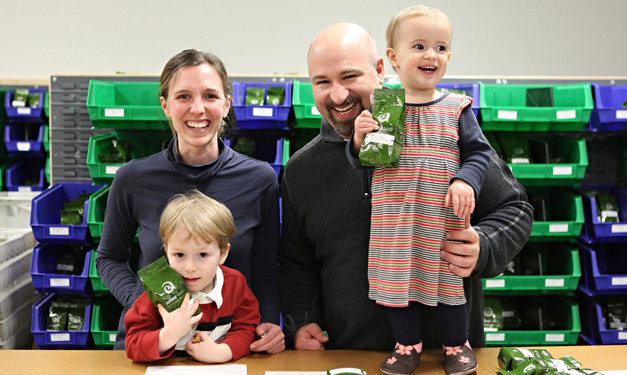 Java is a strange brew at the Lopatin house. So, one morning, while his mom and dad were enjoying a rare cup of Joe, Arthur piped up.

“Is that tea?” Nope, they said; it’s coffee. Considering this, Arthur, 3, a green-tea devotee, replied, “Can I have a coffee with tea?”

“One of our most proud moments,” Aubrey laughs. “I was like, ‘That’s our son!'” Small wonder. As co-owner of Arbor Teas, she and hubby Jeremy are quite steeped in the beverage, selling 100 types of organic loose teas in their cozy web shop.

A steaming cup is a staple with meals (even younger sis Penelope gets a sip or two from dad or mom’s mug) – and dinner table talk, says Jeremy.

“We have to force ourselves to have conversations that don’t include our kids or Arbor Teas,” he deadpans. “And it’s hard!” Aubrey adds.

That’s because they’re head-over-heels for both. Since opening in 2004, the Ann Arborites’ little family biz has become an online go-to for delectable Fair Trade Certified teas – delivered in their lovely green, totally compostable packaging.

Yet their passion for pu-erh and other blends began, in fact, with a bad fit.

“My joke is, to start a tea company, you need to have a wife drop out of architecture school,” says Jeremy. “Aubrey was the instigator of all this.”

That was just two months after their wedding, she confirms. “I used to always say, ‘When I grow old and I retire, I want to open up a cafe.'” And it hit her. “Why am I waiting?”

Quickly, the couple realized they didn’t have the cash for a brick-and-mortar tearoom. But they saw a niche on the ‘net. By then, the loose-leaf bug had bitten.

“We’re both foodies at heart,” Jeremy says. “We really took to the tasting process and understanding tea, origins and all that.”

Neither of the Tree Town natives grew up what you might call a tea “snob.”

But it was a warm childhood memory for Aubrey. “It was a gathering force,” she says. Her mom, a teacher, served it with friends. Particularly peppermint.

“Whether it was a skinned knee or a broken heart,” she explains, “my mom always offered peppermint tea to make you feel better.” Loose? “Oh, no! My mom was a tea bag lady.” Bigelow, that ilk. “I was not bred on high-end tea.”

Still, she’s quick to add, there’s no shame. Lipton, after all, “has the best tea tasters in the world working for them.” As long as it’s “authentic,” she says, “I’ll take it!”

Jeremy, on the other hand, is the guy with the trained taste buds. As a kid, his dad, a dean at U-M’s school of dentistry, also showed him the ropes in the kitchen.

“He was a big Chinese-food cooking fan,” he recalls. “So I started early, understanding how to cook with that palate.” While tea was around (his Canadian stepmom sipped it), it didn’t win his heart until the business began – so much that he’s since taught tea appreciation classes at Washtenaw Community College.

That’s why they’re so discerning. They import their goods straight from the five main sources: China, India, Sri Lanka, Japan and Taiwan. “Organic is No. 1,” says Aubrey; then fair trade. It’s an exacting process. But, as a result, they’ve cultivated rich relationships – often, with mom-and-pop gardens from afar. “Which are fabulous teas,” she adds. “They’re very unique to that estate.”

“We just love rocking out to music packing orders,” she laughs. “We listen to a lot of NPR.” An aunt also volunteers, and Aubrey’s mom is a life-saving babysitter. Even Arthur made his debut on ArborTeas.com, savoring a frozen tea fruit-pop (another friend, Olivia, created this and 37 other tantalizing recipes exclusively for their site).

There’s a cozy connection to customers, too. They make personal deliveries to A2 regulars on Fridays. And each order gets a hand-written note on the invoice stock.

It’s all based in a light-filled Ann Arbor warehouse just opened last summer. After seven years, they finally outgrew the basement of their 700-square-foot home.

A family of four in a tiny ranch is right in-line with their business stance. “Keeping a smaller footprint and keeping things simple all kind of flows into our home life, as well,” Aubrey says. “It doesn’t allow you to acquire a lot of junk!”

There’s always room, however, for more tea sets – a favorite gift for their kids. While their little ones do enjoy real tea, the pair recommends naturally caffeine-free rooibos (say ROY-bus) as a good starter brew for most tykes.

In fact, Darjeeling black and jasmine green teas aside, their decafs are top sellers – due to their unusual combo of organic and a flavor-saving decaffeinating process.

But they’re perhaps most smitten with being a part of people’s traditions around this ancient beverage. It hit home when they recently created user profiles on their website.

Short questions – “How do you drink your tea?” prompted “Volumes” in response, Jeremy says. “Tea is part of their ritual.” From “ancient historical rituals,” Aubrey adds, to “new rituals these 20-somethings are creating around tea in their life. That’s such a fun thing to see.”