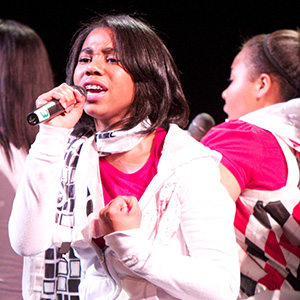 Be prepared to tap your toes to some top tunes performed by the teens of Mosaic Youth Theatre of Detroit’s Mosaic Singers at Singsation March 13-16, 2014, happening at the Detroit Film Theater inside the Detroit Institute of Arts.

Presented by Pepsi, the all-teen members of The Mosaic Singers, who have performed across the United States and in other countries, will show off their song and dance skills in this show featuring songs by some of today’s popular artists like Bruno Mars, Adele and Katy Perry, the group says in a release. Plus, the singers will be performing in a cappella style.

Not familiar with a cappella music? Think of the movie Pitch Perfect. In this style of song, the singers perform without any instrumental music, which means they’ll be making all sorts of sounds with their voices to mimic background music. Pretty amazing, huh?

The first act will feature The Mosaic Singers in a choral concert singing classical, spiritual and world music. Then, families will definitely recognize the melodies the singers bring out for the second portion of the show.

Tickets to the show are $24/general admission and $16/students and seniors with ID. Times are as follows:

If you want to join the fight to help end gun violence, start with these organizations.
Read more
Attractions