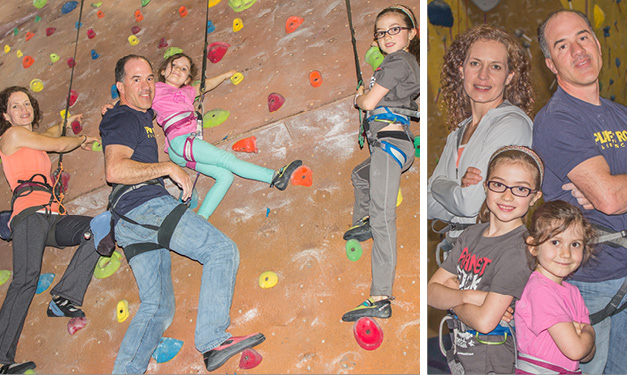 There’s no fear of heights in the Cocciolone family – figuratively or literally.

Whether it’s growing their business, climbing mountains around the globe or ascending their backyard zip-line with their two daughters, Nick and Andrea Cocciolone are reaching new heights and not looking back (or down).

Nick, who started climbing at 19 years old, had just been laid off from a software engineering job when he realized his favorite hobby could become an income source. About five years after he opened his first location, Andrea – who’d been climbing since age 21 – came in as a customer and impressed Nick (and many others) with her skill.

Soon Nick was offering Andrea a job – and, eventually, a ring – and today you might find their kids Lydia, 8, and Tia, 6, passing out equipment at the front desk, hanging out with the climbing instructors or doodling in mom and dad’s office.

Planet Rock attracts local enthusiasts and members from as far as Lansing and Cleveland on a regular basis to climb at its two gyms.

The Madison Heights spot replaced the original location in Pontiac, which opened in 1994 and saw 40,000 members in its first six years. The brand-new building is 20,000 square feet and five stories tall, with new zip-line and rappelling offerings and space for special events, corporate team-building and parties.

“We really try to diversify things,” Nick says. “We thought to make (it) an adult everything-you-wanted-to-do-as-a-kid kind of thing.”

And when it comes to the business of raising two girls, adventure is their secret to success. In addition to the zip-line, the family’s 15-acre property boasts plenty of woods for exploring and catching frogs, snakes and other critters.

“Our kids are into that, and they bring their friends over and they have sleepovers,” says Nick.

They also enjoy family biking and are looking forward to hitting the trails now that Tia has learned how to ride her bike on her own. Both daughters’ love of being active isn’t surprising, but Nick and Andrea emphasize the girls can choose whatever hobbies they want – rock climbing or not. Their interest in that is growing, but Lydia and Tia also have fun with gymnastics and school sports.

“It’d be really cool if they do end up loving (rock climbing) and we’d like them to, but we want it to be fun,” Andrea says, “so we let them decide.”

But one thing is clear: “They definitely do not have a fear of heights,” she laughs. “They might have gotten that from us.”

Mom and dad’s laid-back attitude also applies in juggling everyday life. Andrea works at both gym locations but makes it home before the school bus and is free to start dinner and drive the kids to after-school activities.

“I try to keep life as normal as possible for the girls, especially during construction” of the new location, Andrea says.

Long hours and occasional stresses of working together aside, Nick says it’s been a positive and creative experience. The occasional date night helps, Andrea adds.

“It can become all-consuming. We finally get a date night and we end of talking about work all night,” she says. “But we do our best to set it aside once in a while. We even go climbing on our date nights sometimes.”

As a couple, Nick and Andrea have enjoyed climbing together in Italy, Spain, the Cayman Islands and Canada, to name a few.

Planet Rock offers programs for kids as young as 4, and families are encouraged to try out climbing together so parents can learn the ropes too. Safety is a top priority, Nick says; out the gate, all participants take an introductory lesson.

Both gyms feature walls for all skill and experience levels. Routes are changed frequently to keep things interesting for return visitors.

“Different areas of the gym are geared for beginners,” adds Nick.

Accessibility is a focus, too: Planet Rock works with paraplegics, amputees and people with autism – and it’s also worked closely with the Wounded Warrior Project.

Some area schools, including West Bloomfield and Bloomfield Hills, also now have climbing walls thanks to Nick, who builds the gyms’ walls himself along with some of the pulls and grips. He’s also made walls for local fitness centers.

“You’re building a piece of artwork essentially that’s interactive,” hey says, “because you climb all over it.”

This story originally appeared in the May 2014 edition of Metro Parent magazine.