A Wyandotte dad opened an old-school arcade, The Silver Ballroom, next to his hamburger joint – and the combo has been a total hit with local families. 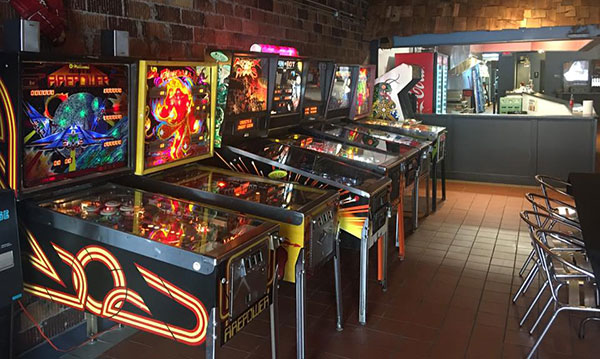 The family-friendly arcade-and-slider joint is alive and well downriver – thanks to a local dad who’s introducing modern kids to old-school fun at The Silver Ballroom.

Jeremy Sladovnik opened his business on April 1, 2017. Situated in downtown Wyandotte right next door to his popular Joe’s Hamburgers eatery, this cozy place is packed with a dozen pinball, video game and Skee-Ball machines, complete with shiny red booths and small entrees and appetizers for tiny tummies.

Sladovnik says his primary goal was always to have a fun place for kids.

“I know that to make this business work for a long time, I have to appeal to kids,” the lifelong Wyandotte resident says. “I went and talked to third, fourth and fifth graders to try to bring them in and keep their business for years to come.”

You might also spot his own kids – son Rocket and daughter Poppy (his “little Pop Rocks”), who were 6 and 3 at the time The Silver Ballroom opened – hanging out or helping “clean” the restaurant.

Business is definitely a family affair. Joe’s, opened in 2009, is named after his grandfather, Joe Kuzia, who’s also a regular. And his wife, Jaime, owns a salon down the street. She also came up with the arcade theme.

The food is playful, too. In addition to little sandwiches and sliders, which are just $2-$4, it serves up egg rolls, fried green beans and homemade tacos.

“When I was building this menu, I thought of a mom or a dad that wants to bring their kids somewhere but they don’t want to go to Chuck E. Cheese’s, and it’s not going to cost them a fortune,” Sladovnik says. Games are about 50 cents a play, after all.

“There aren’t very many places you can go and get something good to eat and play some cool games for under $10,” he says. “It’s awesome for families.”

This post was originally published in 2017 and is lightly updated on occasion.