Plaid Tidings at The Encore Musical Theatre Company in Dexter 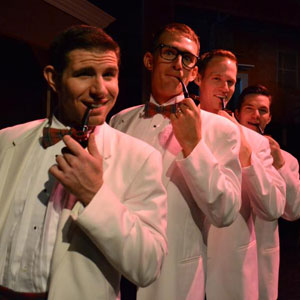 Back from the great beyond for one last Christmas performance, the guys from Forever Plaid are heading to The Encore Musical Theatre Company in Dexter Nov. 23-Dec. 23, 2012 for Plaid Tidings, a holiday musical for the whole family.

During the original smash show, Francis, Jinx, Smudge and Sparky are a young, ambitious boy group of the 1950s. Tragically killed in a car crash before they can record their big album, they come back in spirit for one last shot at music fame.

In Forever Plaid: Plaid Tidings, the boys come back yet again – after they get a call from Rosemary Clooney, who tells them they're needed to put some harmony back into a dissonant world in another posthumous performance.

This time around, the boys perform a number of Christmas classics with a 1950s twist – that is to say, "Plaiderized" – for your enjoyment.

This holiday special includes appearances by holiday crowd favorites the Rockettes, the Chipmunks and the Vienna Boys Choir – all helping to resurrect the boys' hilarious, crowd-pleasing, super-abridged version of The Ed Sullivan Show (it checks in at three minutes and 11 seconds). Also part of the show is the "Plaid Caribbean Christmas."

The Encore Musical Theatre Company is a nonprofit community theater group based in the village of Dexter, showcasing the talent of local and professional performers for a truly wonderful family stage experience.

For more information in the 2012 Encore Musical Theatre Company performance of Forever Plaid: Plaid Tidings in Dexter, check out the Metro Parent listing.

Get ready to have the best spring break ever with these creative trips and fun activities.
Read more
At Home