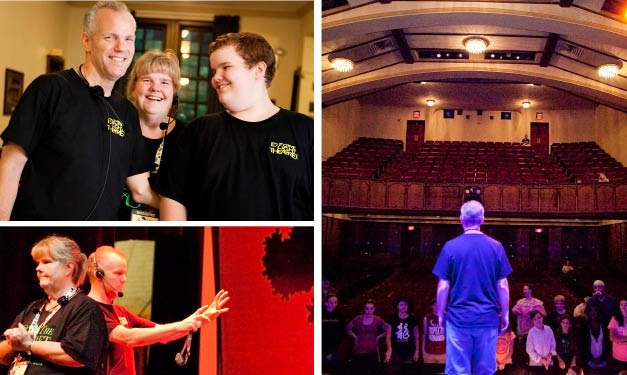 The theater is a magical space of costumes and props, song and drama – and the suspension of disbelief. But for Redford dad Jim Pinard, it means much more.

“I think theater is one of the few endeavors that truly is a community endeavor,” he says. “It has the ability to draw in many generations of people to work on the same project – and also benefit people outside that group.”

And, at his new Electric Light Theatre, it’s family. Literally.

Pinard, 52, recently launched this community troupe with his wife, Vikki, 47, and their son. Dad’s the artistic director/thespian and mom is executive producer, while Stephen, 12, loves anything behind the scenes. Off-stage, Jim helms Studio Pinard, a boutique of video production, graphic design and photography; Vikki is a stay-at-home mom.

Their Ann Arbor/Ypsilanti-based group welcomes kids to senior citizens, a driving reason for ELT’s creation. “In the community theater realm, you’re really talking about an adult arena,” Jim explains, “whereas ours is more of a youth-to-adult focus.”

Its first production, The Secret Garden, took place last month at the Lydia Mendelssohn Theatre at Jim’s alma mater, the University of Michigan in Ann Arbor. The debut included young adults, too – another group often a bit adrift.

“We found there was a very big gap for kids who are going to these middle colleges,” Jim says, “where there’s not a lot of theater going on – or shows they don’t want to participate in.”

Electric Light Theatre is just getting started in the Ann Arbor/Ypsilanti area. Find out what this all-ages community theater troupe is up to – and how you can get involved – on group’s website or on Facebook.

Finding the right fit was once a challenge for Jim, too. In second grade, he auditioned for a part in Cheaper by the Dozen. He didn’t get it.

“That lasted all of one rehearsal!” he says. “I didn’t know what a script was. Here I am at this rehearsal, feeling completely overwhelmed – but fascinated.” The bug had bitten.

He dabbled more in fifth grade; then junior high. But it wasn’t until the high school drama club that acting came to fruition. “As soon as I walked onto that beautiful stage, I said, ‘This is where I need to be.’ I worked on 10 productions throughout high school and started doing community theater.”

Later, while pursing a communications degree, Jim took nearly every theater class – from acting to lighting design. Little did he know, the latter would lead him to the love of his life. In 1994, a mutual acquaintance introduced Jim to Vikki, who was working on lighting for a show. Jim offered to help her out. “He said, ‘Sure, what do you need me to do?'” Vikki recalls. “I went away for a couple hours … and when I came back, he had it all done.”

They were married five years later. Stephen made his debut in 2001 – and was a born theater tyke. At just 4 months, he snoozed in his Pack ‘n Play by mom as she ran lights for a Detroit production of To Kill a Mockingbird.

“He’s done everything,” she says. “When he was 2, I started having him do the lights and put the dimmers up and down. He has worked backstage, where he’s moving sets and props. He’s climbed ladders, built sets and painted.” In Garden, Stephen was the middle-kid between the house manager and backstage crew. Oh – and he trained all of the ushers.

“I don’t know that there’s anything I couldn’t throw at him,” says Vikki. “He’s grown up in the world.” Jim believes giving kids a taste of theater helps them grow as individuals and learn how to relate to adults in a relaxed way. That’s essential at ELT.

“If you think about it, in most social settings, children are the third wheel,” Jim says. “They’re often told to go in another room or go play. In the theater, they’re foisted with the adults. It just becomes a natural extension to train the kids.”

The Pinards are hunting for their next show – and venue. “We’re looking for some kind of consistent place or places we can call our home,” Jim says. “We’d like to do a variety show, straight show and a musical. We’d like to revive a lot of classic theater.” Keeping it family-friendly is key. In fact, they’re contemplating creating a rating system for their plays, akin to the film-rating system (from G to R), so parents have a better sense of the content – which can be murky.

“They can determine for themselves what is appropriate for their 7-, 10- and 13-year-old,” Jim says. “They’re able to make an informed choice. A surprised audience is a disgruntled audience, and you’re not going to get them back.”

Your kids can meet their favorite authors and learn to love reading even more at Macomb County's first-ever Author Festival on May 21, 2022.
Read more
Camps

Looking for a summer camp in or near Macomb County? We've got you covered with some of the coolest camps in the area, courtesy of Make Macomb Your Home.
Read more
Guides

Put your putters to the turf in 2022 at one of these miniature golf courses in metro Detroit and Ann Arbor.
Read more
Advice

What should American children know about our country, and how can parents instill patriotism for kids at their home? Teachers share these 10 examples of patriotism.
Read more