Shoemaker and the Elves at Marquis Theatre in Northville 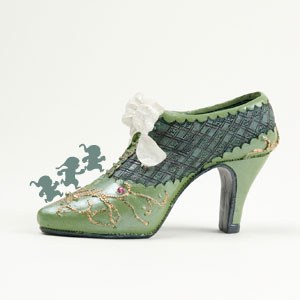 Ever wish you had a few "helpers" around the house – or maybe at work? That's exactly what one lucky guy gets in Shoemaker and the Elves, a kids' stage show playing at Marquis Theatre in Northville. It runs most Saturdays and Sundays from March 8 through May 4, 2014 (except April 20, which is Easter Sunday) – plus three special weekdays (April 23-25).

In this local theater's spin, children discover the classic tale of a poor, hardworking shoemaker whose life is "transformed and enriched when visited by some magical friends," as the Marquis puts it. While the wee elves work their wonders, your own little ones' toes will be tapping to a variety of fun, upbeat tunes, including "Shoes," "Happy Feet," "Tiptoe Through the Tulips" and "We Love to Dance."

This is a kids' show by kids, too! There are two casts, and each has 13 child performers plus a few adults, Marquis tells Metro Parent.

Shoemaker and the Elves is recommended for little audiences ages 3 and older (under age 3 not admitted). It runs about one hour and 20 minutes with a brief intermission. Concessions are available, too.

Tickets are $9 each. This show is the first of a four-show "Classic Storybook Season" run at the Marquis; you can buy tix to all four for just $30!

For the basic at-a-glance details on the 2014 production of Shoemaker and the Elves at Marquis Theatre in Northville, swing by the Metro Parent calendar listing.

Get the kids inspired by Detroit's vast history of innovation in this culturally rich city of Dearborn.
Read more
Travel

Are you looking to get away with your family or spouse? Check out the all-inclusive resorts in Michigan for some family fun or alone time with your significant other.
Read more
Health