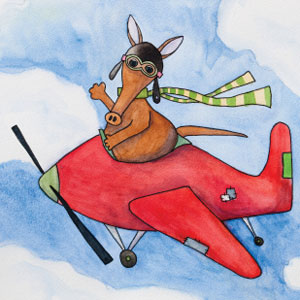 Aabigail is just like any other kid. Except that she's an aardvark! And, in The Aantsy Aardvark kids stage show – appearing at St. Dunstan's Theatre Guild of Cranbrook in Bloomfield Hills Nov. 18-20, 2011 – this young critter goes on a worldwide adventure with a group of rowdy sailors, a featherless parrot and a six-eyed scumbucket.

This hour-long musical comedy is a southeast Michigan original. Michael Brooks of Royal Oak co-wrote it with his brother Patrick of Milwaukee back in 2004. Their fun show is filled with jokes, songs, dances and noises that will appeal to kids and parents alike. There are lessons here for little ones, too, like "be yourself" and a reminder "there's no place like home," Brooks says. Tickets are just $8.75.

Check out the Metro Parent listing for more on The Aantsy Aardvark at St. Dunstan's Theatre Guild of Cranbrook.