How to Take a Perfect Selfie With Your Family

Do you know the art of taking a selfie? If you haven't perfected it yet, don't worry: Here are one mother's tips for how to take selfies with the family. 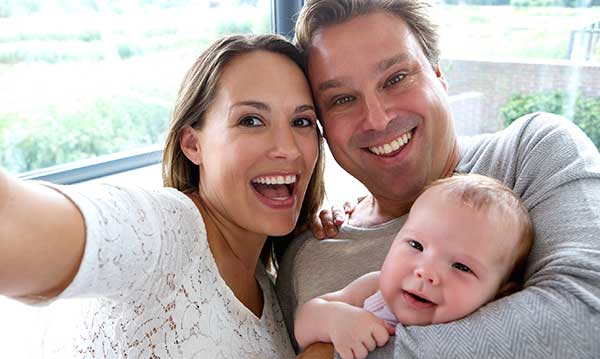 Karla Hardies can be described as a long-time selfie fanatic. She remembers being a college student, holding up her film camera, crowding in with her friends and hoping for the best. She says she cherishes the off-center, goofy pictures that she found in the envelope after the film was developed. With smartphones and digital cameras, taking pictures and selfies is much easier. Hardies has a few tips for how to take selfies as a family.

While many moms fill up their social media streams with photos of their children, the moms are often missing from the frames. Selfies are one way to go from photographer to part of the memory.

Selfies were once thought of as a fad for teens and tweens, but they have become a fun way to capture a moment. Ellen DeGeneres hosted the Oscars in 2014. In the middle of the show, she huddled up with a few friends like Bradley Cooper, Meryl Streep, Kevin Spacey, Angelina Jolie and Brad Pitt for a group selfie. The photo, which was shared on Twitter more than 3 million times, is slightly blurry and not everyone is completely in the frame, but selfies aren’t about being perfect, they are about marking a moment in time.

In 2013, Hardies spent the entire year compiling as many selfies as possible. They ranged from full-family shots to close-up shots with her husband. In December of that year, she picked her favorites and used them to create a holiday card, captioning it “Have yourselfie a merry little Christmas.” She knows a thing or two about taking selfies and also getting the family in on the fun.

“First things first, hold the camera at arm’s length. The photographer gets to be in the center. Everyone else should crowd around,” Hardies says. “Tell everyone to smile and adjust the camera as necessary.”

Her advice on mastering the art of taking a selfie is to take a few shots in a row just in case someone blinks.

Hardies’ children are teenagers. While they aren’t always amused with their mom’s request for another photo, Hardies says it’s important to take the pictures anyway. “Don’t wait for the perfect moment because it might never come,” she says.

While Hardies doesn’t use anything but her own practiced hand, there are several tools on the market designed to enhance cell phone selfies.

“These days fly by in a blur. So stop, stick your heads together and smile a cheesy smile. Treasure the pictures. You can ever have too many family photos, no matter how crooked, or silly or full of blinking eyes,” Hardies says.

Have any additional tips for taking the perfect family selfie?