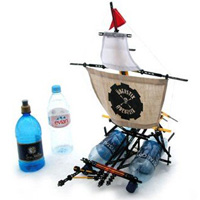 As a kid, it was a mini epiphany when I discovered Duplos and LEGOs snapped together. So maybe having the same manufacturer had something to do with it. At age 6, though, I was more excited about constructing a better Tower of Pisa – or whatever my imagination cooked up.

But who knows what I could have concocted with a few fistfuls of UberStix in the mix! These plastic pieces are like the great unifiers of the building-kit universe. They’ll pair with Legos, K’NEX, Erector, Zoobs, Zoom and Atollo systems. They’re not brand-name snobs either. In fact, UberStix love linking up with "litter," too: egg cartons, Popsicle sticks, paper clips, ketchup bottles – you name it. It’s the sort of stuff your family is probably already using for craft time.

Where the idea of K’NEX started with plastic straws (which UberStix loves, too), this brand is really bent on recyclable-material domination. It’s also known as "upcycling" – using junk for a "higher purpose." This green philosophy actually runs pretty deep. The line is touted as the world’s first Planet Positive-certified toy, reportedly offsetting its carbon footprint by 110 percent. To spur on kids, its UberStix Scavenger Recycling Series even comes with a checklist of old stuff they have to gather up before creating.

Other pickings range from the UberStix Sailboat, which uses few old water bottles to help buoy it (complete with a sail that makes it operational, with a bit of wind), to a line of moveable critters – like a leaping UberFrog and an UberBat with "real bat-wing action." For the most variety, the UberStix Starter Set boasts 450 pieces and a 40-page booklet, launching your adventure with the how-to for a UFO, tower, ray gun and more. (The UberStix website features free project downloads, too.)

As you might have caught on, all these creations are also darn functional. That’s actually what prompted creator Dane Scarborough about five years back. He bought his son a hang-glider construction kit – but it wouldn’t fly. So Scarborough, a designer by trade (not to mention a certified scuba diver, band drummer and drawing-class teacher – hello, cool-dad points?), tacked on some straws, swizzle sticks and other stuff. Since that initial "take-off," he hasn’t looked back.

In theory, using UberStix means fewer "licensed" products to buy (read: accessibility – another big focus for Scarborough), all while granting your budding architect a bigger creative license. And in fact, if she gets savvy enough, she can try an UberStix Discovery Center challenge – or tackle one of the UberArc Architectural Series kits, packed with thousands of pieces and blueprints for re-producing real buildings, like the Empire State.

And maybe even a leaning tower or two?

UberStix range in price from about $8 to over $300. They’re primarily designed for ages 8-plus.

Do mom and dad need a weekend away without traveling too far? Consider one of these romantic getaways for parents in Michigan.
Read more
Guides