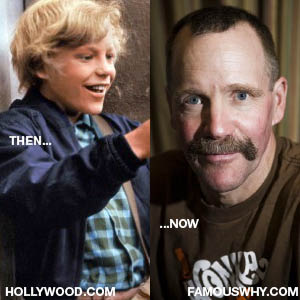 You can finally end your search for the Golden Ticket, because they're now available for all. Children of all ages – parents, too – can enter the wonderful world of Willy Wonka & The Chocolate Factory March 8-9, 2013 at the Redford Theatre in Detroit, complete with live, in-person appearances by two of the kids who starred in the 1971 flick: Paris Themmen, who was the rambunctious Mike Teavee, and Peter Ostrum – Charlie Bucket himself!

Metro Parent was thrilled to chat up Ostrum before his center-stage appearance in an exclusive Q&A (which appears just below). The New York dad and veterinarian is excited to meet the crowds at the unique historic Redford Theatre movie house. Granted, the walls aren't edible here – but you and the kids can munch on some house-made popcorn as you sit back and watch this cult classic come to life – literally. Tickets to the film are $5, and the guys will autograph customer-provided items for $20 (cash only).

Times for this delightfully sweet event are as follows:

Autographs are signed in the lobby prior to the show and during intermission.

The Redford Theatre is located at 17360 Lahser Road in Detroit. Get full Willy Wonka & the Chocolate Factory details in the Metro Parent listing.

Before you head to this event, check out Metro Parent's one-on-one with the film's very own Charlie Bucket (Peter Ostrum)! Get the low-down on where Charlie – I mean, Peter – is now, what being a child film star was like and a behind-the-scenes look at what the set of Willy Wonka & the Chocolate Factory was like.

How old were you when you starred in Willy Wonka & the Chocolate Factory?

Twelve, and then I turned 13 during the filming. I got to Germany probably in the third week in August. My birthday is Nov. 1.

What was being an actor at such a young age like?

Well, I was a rookie. I had had some theater experience in Cleveland through the Cleveland Play House Children's Theater. I had not done any film work, nor any television commercials – just theater work since I was about 8 or 9 years old. The other cast members, they had had more theater work, more film work, more television work than I had. They were established; I was not.

Did you ever expect that the film would become so well known?

No, none of us had any idea. It's what, 40 years later, and we're still talking about it and people are still interested; it's amazing. When it first came out, it didn't have any following at all. It had kind of lukewarm reviews and died kind of a quiet death. It wasn't till video, and then when DVDs came out, that the film really caught on again. Parents kind of rediscovered it for their children, and now grandparents are rediscovering it for their grandchildren, so it's kind of been passed on from generation to generation. We had no idea that it would be successful. It was the perfect storm.

How did being in the film change your life as a child?

It instilled work ethic. We were children, but we were all expected basically to work as professional actors. That really stayed with me. Maybe I was a hard worker beforehand, but it made a big impression on me. I didn't follow through in the film industry, but with what I do now as a veterinarian, (the work ethic) definitely carried over to school.

What made you want to become a veterinarian and take that route in life?

After the film, I worked with horses at a stable and really enjoyed working outdoors. A good friend I had was an equine veterinarian, and it just looked like he was having so much fun doing what he was doing. And I said, "Boy, that looks like something I'd like to do." It was tough to get into school, so I just put it on the backburner – but still always had in the back of my mind. I took a year off between high school and college, and that really cemented that that was what I wanted to do, and then I pursued it. It's a great career. I like working outdoors; I travel from farm to farm. There's a mental aspect where you've got to be smart and figure things out, but there's a physical aspect to the job that I really like, as well. For me, it's the perfect job. Plus, you get to act a little bit, too.

Do you have children?

Yes, and that's a another good point: I was not interested in talking about the Willy Wonka experience until I had children of my own and saw that they were interested. It was kind of fun for them. But I do enjoy going to schools and traveling a little bit. My daughter is a junior in college and my son is a sophomore in high school.

What do your kids think of the film?

It's old news to them. They get a kick out of it. It's difficult to say how it's changed my life in their lives, because it's been part of my history since I was a little kid. They certainly don't advertise that their dad was Charlie (Bucket), and I don't advertise it, but I think they're proud.

Do people still recognize you as Charlie Bucket?

Oh, no. People think I look like Jack Albertson (who played Charlie's Grandpa Joe) now – maybe not quite that old.

So how did you get the role of Charlie Bucket?

I worked at the Cleveland Play House, as I said, at the Children's Theater, and the Children's Theater had a very well-known reputation. It was one of the theaters that the casting agency contacted. The casting agency was out of New York and they contacted the playhouse and just asked if they had anybody that they might recommend to be cast as Charlie, so my name was given to them.

One of their reps came out from New York and met me. We didn't have a script, so I just read from the book, Charlie and the Chocolate Factory, and we just had a tape recorder and tape recorded my readings and took a few Polaroid pictures, which they took back to New York for the producer and director to look at and listen to. Basically, they said, 'Don't call us; we'll call you if we're interested' – and they were. That whole process started in June and I went to New York in late July for a screen test, but they kept looking. Then, a couple weeks later, they decided that they wanted me.

While on-set, what was one of your best experiences while playing Charlie Bucket?

Probably working with Jack Albertson. He was wonderful, and Gene (Wilder) was, too. I was just very close to Jack, because we were always together in the film. It's a long, tedious process making a film. It's a lot of work. After the first week, the novelty wears off pretty quick, but I have positive experiences with the whole film.

At such a young age, how did you prepare on set to 'get into character'
?

In many ways, it's different than theater. In theater you memorized all of your lines for the entire play. And, each night, you can get into your role. In filmmaking, you're taking short takes; you have to memorize a few lines for that particular take that you're doing and then you can forget it and go one. It's a little bit difficult because you're in and out, in and out. I would prepare the night before. Our director was probably not the easiest person to get along with, but our dialogue coach – who I was very close to – he was kind of my pseudo director – and Jack (Albertson) was, too. Jack and Gene would also give a lot of advice, as well.

Did you miss out on any particular childhood activities or events while making the film?

No. Even though it seemed like a long time, it was relatively short. And I came back to school and I had a tutor while I was filming, so I was pretty much up to speed on all my studies and classes. I got right back into playing soccer and riding horses and all those types of things that I did. And I basically just didn't want to do anymore acting for a period of time. That was the only role that I did, and it was successful, so that was kind of neat.

Out of all of the other kids on set, who was your favorite to work with?

What was your favorite scene to film?

Probably the dance sequence with Jack and the other grandparents, when Charlie comes in and he's announced that he's found the Golden Ticket.

What is your favorite type of candy or chocolate?

Was the candy on set real, and were all of you able to eat it?

How do you think that this film will impact younger generations in the future?

There's a lot of neat values that the film promotes: working hard, being honest and listening to your parents. The fun of the film, and why it kind of endures, is that adults and kids can watch it, and everybody takes something a little different from the film. I think Mel Stewart, our director, said it best, in that he wasn't setting out to do a kids' film; he was setting out to do a film that had kids in it. It wasn't necessarily a children's film, and I think it comes across that way, too.

What did you learn – from not only being in the film but from watching it, as well?

It was amazing to me doing all that work and how it could be condensed into 90 minutes, a half an hour. So many things weren't included, different shots and things. The finished product was so different than what it was like when we were filming.

What's your advice for young actors?

Audition! That's probably Charlie's mantra: If it's really in your heart, then try. Everybody, if they work hard, has as good a chance as anybody else; that's what I tell the kids at schools. I ended up doing something completely different, but something that I really love to do. You have to find what your passion is. And, if acting is your interest, than by all means go for it. But it's not an easy way to make a living, that's for sure. You know, the Ronny Howards and the Jodie Fosters of the world are far and few between. There are few people that are successful as children and then carry that into an adult-acting career. There's few, but not many.

What are you most looking forward to during your trip to Detroit?

I'm very interested in seeing the theater. I like the idea of showing the film and then being involved with the audience asking questions and seeing people that are true fans of the film. I haven't been to Detroit in years, so I'm looking forward to it.