Yo Gabba Gabba! Live! at the Fox Theatre in Detroit 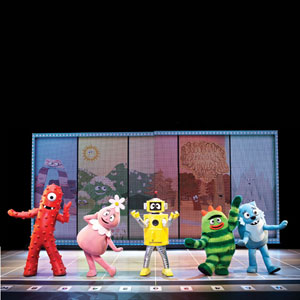 If your kids want their favorite Yo Gabba Gabba! characters to come to life right before their eyes, there are three words they must shout on Jan. 12, 2013: "Yo Gabba Gabba."

Sit back and observe – or join in the shouting fun – as your kids' wishes come true! Because that's when DJ Lance Rock, Muno, Foofa, Brobee, Toodee and Plex from the award-winning television show, Yo Gabba Gabba! jump from the television to the stage when their tour, Yo Gabba Gabba! Live! Get the Sillies Out! arrives at the Fox Theatre in Detroit.

The award-winning show, which is in its fourth season on Nick Jr., is hitting the road for the third year in a row. The tour, which started on Nov. 23, comes to more than 50 cities across the United States, and Detroit is one of the lucky stops.

So what can families expect from this live performance? They're in for a high-energy show featuring bright colors, cool tunes and much more. The interactive experience will entertain people of all ages – and there's a special treat for moms and dads, too. Hip-hop legend Biz Markie joins the gang on tour to present Biz's Beat of the Day. In addition to his cameo, the show also features Super Music Friends and Dancey Dance guest performances.

See the Metro Parent listing for more on Yo Gabba Gabba! Live! Get the Sillies Out! at the Fox Theatre in Detroit.

Here are tips from the nation’s leading scholars on race, democracy and inequality.
Read more
Advice