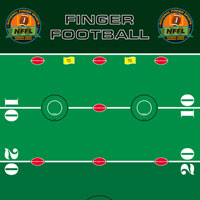 Football is an American pastime – typically done outdoors (clearly, throwing a football in the house isn’t the wisest move). If you don’t have the opportunity to get outside, though – and you don’t want to break mom’s favorite vase indoors – then play some Finger Football.

Yes, the name sounds a little odd. But let’s kick it old school for a second and give you a quick reminder.

Remember playing football with a sheet of paper folded into a triangle? You used a tabletop as a field, and you scored a touchdown by flicking the "football" across the table. Well, take that idea – and add a tabletop replica of a football field, dice, a slider football, foam football, line of scrimmage marker and eight yellow rings.

According to BoardGameGeek.com, the durable, multi-colored playing surface looks much like a real football field, only much smaller – two-feet by four-feet to be exact! The backside of the playing surface is covered in a non-slip material, making it easy to use the board on most surfaces – keeping it in place for the game.

As for that paper football, it gets two updated replacements – a foam football for kicking field goals and a one-inch slider, which has a ball bearing inside, to flick down the surface for runs, passes, touchdowns and two-point conversions.

It’s simple: Just follow the directions, which are included in the game pack, and you’ll be tackling touchdowns in no time. Take it anywhere, too – all you need is a flat surface to place the board on, and you’re ready to play.

Also included in the line of Finger Games are Finger Baseball, Finger Golf and Finger Soccer.