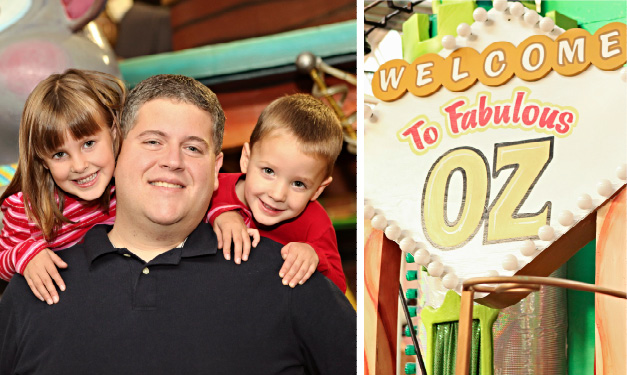 First things first: Yes, Steve Abood has dressed up like a polar bear. He’s personally met the real Santa several times. And walking through a sea of papier-mache heads and 15-foot floats every day never gets old.

For the guy in charge of all things promotional at The Parade Company – producers of America’s Thanksgiving Parade in Detroit – unusual is normal.

“You never know what the day’s gonna bring,” says Abood. “It’s definitely not your typical 9-to-5 job!” Not to mention, his 100,000 square-foot workplace is a Wonka-esque wonderland for his tykes, ages 6 and 3.

“They call it ‘Clownie Work,'” after the company’s iconic clown mascot. And they especially love that “Monkeys Jumping on a Bed” trampoline float.

Dad, truly a big kid himself, is also a whiz at making heavy-duty event planning and marketing look like a breeze – and floatloads of fun.

As you read this, he and his crew are putting in 80- to 90-hour workweeks to pull off the Nov. 24 spectacle on Woodward Avenue without a hitch. “Labor Day is kind of our D-Day,” he quips. “Nobody takes anymore vacations.”

Abood’s tasks run the gamut from branding the company’s image to rallying sponsors and coordinating media to setting up grandstands. And not just now: He also helms marketing for the July Target Fireworks, and 40 ancillary events.

“They’re the two largest free events in the city,” he says. And his job boils down to one simple thing: “Making sure everybody’s having a good time.”

He’s definitely qualified. “Looking back,” he says, “I’ve always been in some sort of event planning industry or frame of mind.”

An on-the-go childhood set the pace. His dad’s work in auto quality control moved the family from Lansing to Georgia to Florida to Texas. His older brother made pals through football. His younger sis also fell into friends fast. “Me, it was just going up to people saying, ‘Hi, I’m Steve.'” Working on student council committees, especially dances, quickly became his forte.

Even earlier, he’d be the kid helping mom plan and cook meals. Or figuring out the vacation itinerary. Or finalizing details for grandma’s birthday.

“I guess I always liked the parties,” Abood says. “Fun in numbers is just more fun!” His parade work started with a three-month gig as a tour program contract work. Abood wrote himself into a full-time position – literally – when he pitched for the vacant marketing position.

Five years later, he’s still loving it. Even though he seldom gets holidays off.

“It’s the nature of parades,” Abood says. “I tell my wife she’s married to a doctor – just not the pay!” The pair met at Sam’s Club, where they both worked while attending MSU (Sarah now handles HR at Nino Salvaggio).

“On the main level, there’s not really a spot where you can just kind of sit,” he says. “There’s always something to do.” Whether that’s the kitchen, where Abood’s often whipping up his own recipes with his kids help – or ruling one of the Dance Dance Revolution pads.

“Yes… I dance,” Abood says, laughing. “I’m somewhat of an idiot.” He’s been known to tear things up at a Pitbull concert – and his weekly Zumba classes in Dearborn (he’s been known to bust moves around coworkers, too).

And while life is busy, Abood plans special events for his kids, too, like taking his daughter to The Nutcracker, or a trek to Metro Beach Metropark with his son.

For his family, the parade’s become an annual tradition, too. And Abood is nearby. No, not dancing down Woodward (the bear costume was for a photo shoot), but rather, in “TV Zone,” where he’s pacing the parade for national broadcast.

So, what time’s he back for turkey dinner? Naturally, every year is different.

“Wait for me if you want, but it’s not required,” Abood always says. Though he’s gotten savvy: “I’ve recruited more family members to become volunteers in the parade, so they’re not just waiting for me to arrive!”

In this year’s spectacle, dubbed “So Much to Believe In,” Abood says to watch for four new floats. The family-geared Character Breakfast returns. And, of course, Santa will officially kick off the season.

“Every year we try to raise the bar, making the event always bigger, always better.” For him, though, the biggest kick will always be simple.

“The kids, they’re just smiling, saying ‘That’s my favorite; no that’s my favorite!’ – they can’t make up their minds,” Abood says. That’s when “you know what you’re doing is worthwhile.”

If you want to join the fight to help end gun violence, start with these organizations.
Read more
Attractions