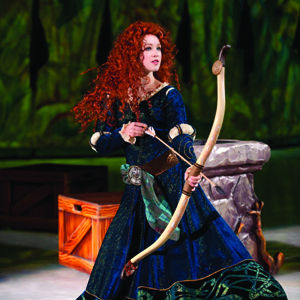 Figure skater Taylor Firth plays Merida, the bow-wielding heroine from Disney/Pixar’s Brave in the latest Disney on Ice spectacle Rockin’ Ever After, coming to the Palace of Auburn Hills Oct. 3-7, 2012.

Firth starred in the 2010 remake of the 1978 skating movie Ice Castles and is a three-time National Competitor who has been on the ice since she was 6. Firth talked to Metro Parent about her role, skating and the joys of performing and inspiring kids.

Brave was the first Disney-Pixar film with a lead female protagonist. For you, what makes Merida stand out as a Disney princess?

She’s her own person. She doesn’t necessarily act the way her parents or others expect her to do. I think it’s important for kids to see that you can have your own dreams and aspirations beyond what your parents think you should do.

You’re a natural redhead; do you think the red hair helped the casting decision as Merida?

A big part of the magic of Disney is keeping things as realistic as possible, so I think my red hair did help!

You’ve been skating for a long time, what have been your proudest moments of your career?

I was a national competitor for some time, which was amazing. Also, I was really proud the first time I skated in my first Disney show, making my way from competitive to professional performance skating. It’s great to see all the girls dressed up like you (the character) and to see how happy they all are to be there!

What do you hope the kids leave the show feeling?

I hope that the kids leave the show with some really special memories. I don’t think that people get to do many things as a family together anymore. I hope the show can be something magical they can share.

See the Metro Parent listing to learn more about Disney on Ice Rockin’ Ever After at the Palace of Auburn Hills in October 2012.