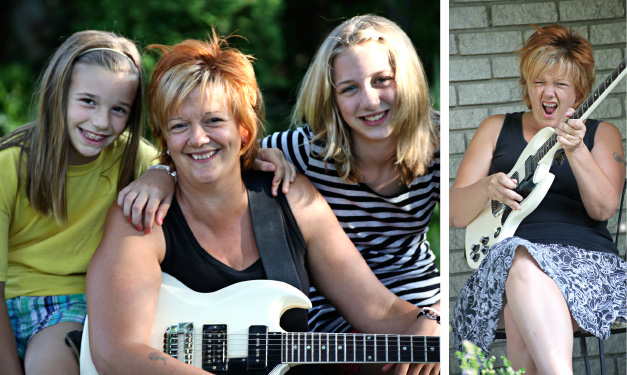 This story appeared in the August 2010 print edition of Metro Parent.
Photos by Kristen Hines

Two things are not allowed in Paula Messner’s Royal Oak home: glitter and Barney. That’s why she formed Candy Band seven years ago. “I hated that song!” she laughs.

The original “mom band” in town, the Candy Band’s punk takes on kid ditties (sans anything by purple dinos) were refreshingly parent-palatable. And, even with their fifth album, High Five, they’re still rocking families’ socks off.

Which wasn’t easy for a punk-turned-parent to find. In the ’80s, Messner sang and shredded for Vertical Pillows, an all-female rock group in Detroit. Then, she was with the Motor Dolls until baby Charlotte arrived.

It lasted all of four years. By the time second daughter Rebecca was 2, “I was itching to play again. I couldn’t stand it.”

All that whiny kids’ music on the market was the final straw.

So Messner scouted out three other hip stay-at-home moms with virtually no band experience at her local YWCA in Clawson. Candy Band’s riffed-up version of the SpongeBob SquarePants theme and originals like “Ice Cream” were soon turning strollers.

“I’ve seen grandmas singing along. We have kids in diapers dancing,” Messner says. “I call it family-style punk rock.”

Inspiration wasn’t hard to find. Take “Ken Lost His Head.” Or “Rock, Paper, Scissors” (that’s how the Messners determine who gets dessert first).

Today, the band members’ nine kids, now in their tweens and teens, also pitch in. They sing on two tracks off the new album and hawk T-shirts and pizza at shows.

At home, mom admits she’s the family rebel. While she’s dyed her short tussled hair red and white (among other colors), her girls lean toward blouses and curls. Rebecca digs rock and pop, but Charlotte prefers classical and plays the viola.

“It’s probably good that I’m the crazy and wild one,” Messner figures.

Sure, it’s a long way from hanging out with Rob Tyner of the MC5. “We’re home by 8,” Messner quips. But the band’s logged well over 300 shows – and they’re Lollapalooza veterans. “That’s a hard gig to get, man!”

And the schedule’s just as busy. “I have to make dinner in the morning sometimes,” says Messner, who also teaches guitar lessons. Luckily, she loves to cook; she’s known for her “weird wraps” and a mean Mexican casserole.

As for Candy Band, expect plenty more. Messner’s even considering a solo album. The tentative title? Glitter Will Never Enter My House, of course.

“There’s never a shortage of subject matter,” she says. “Kids are a blast!”

In March, metro Detroit's trees are packed with the sugary sap needed to make maple syrup. Learn about the process at these 2022 maple sugaring events.
Read more
Attractions