The Heidelberg Project in Detroit is a Kids Art Wonderland 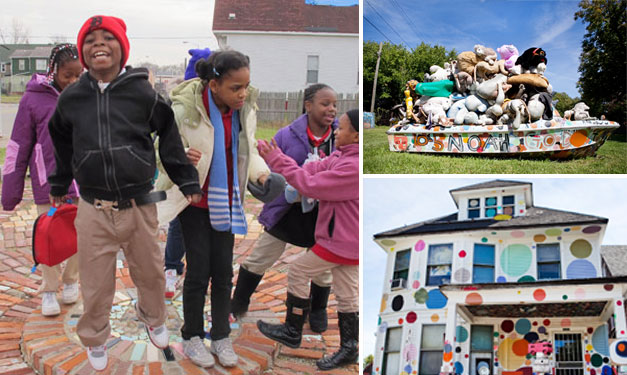 Take any pretentious notions of “art” and throw them out the window – and all over the porch, walls, roof, fence, front lawn, trees … empty lots, too.

Welcome to The Heidelberg Project. Parents, you’ll be forgiven for perhaps feeling a bit thunderstruck, at first, by this jarring array of, quite literally, junk – brightly reviving two blighted blocks in Detroit’s McDougall-Hunt neighborhood. But your kids, we promise, will be delighted.

“The children are drawn to The Heidelberg Project because it’s so comfortable,” says Jenenne Whitfield, executive director. They’re running around in the summer sun – and making snow angels in the lot in winter.

A story of Detroit history, creativity

And boy, will it get them thinking. About everything from social studies to economics.

After all, that’s at the heart of this “outdoor art environment”: Founder Tyree Guyton grew up here. And, to fight its steady decay, drug and poverty issues that followed the city’s 1967 riots, Guyton, at his grandfather’s urging, “picked up a paintbrush instead of a weapon,” as HP’s website tells it.

In the last 27 years, his resulting work has made a powerful statement, drawing both criticism and celebration. “It’s really a place where you can see and sense and feel things,” says program coordinator Margaret Grace. “It helps kids imagine new possibilities of what art can be.” For one thing, homes can, you’ll see, be canvases.

Like The People’s House – Guyton’s childhood home, now covered in his solid-color trademark polka dots, a symbol of connection – and an instant draw for kids. They love the Party Animal House, too: an abandoned home now “protected” by an army of weatherworn Pokemon, Care Bears and other plush critters.

“They see stuff they recognize,” Grace says, which sparks curiosity and conversation. And The Number House, the brainchild of its former resident, was, in fact, created to teach local tykes counting and math. (Its interior opened in 2013, too, as a small gallery for youth art – there’s a gift shop, as well).

Many layers of meaning

In the process, by giving “discarded” items new life, the work is designed to give people and things value. “Children can begin to translate this language to understand how we sometimes discard communities and people,” Whitfield says.

And those empty lots, where houses are gone, are now “Lots of Art” – and home to deeper lessons for older kids. There are somber memorials to substance abuse and lynching victims, as well as to devastating events like the Holocaust, Gulf oil spill and Haiti earthquake. Often, old shoes represent the “soles/souls” of the lost.

Yet hope shines, too, in painted “Doors of Opportunity,” a pretty recycled-material sundial (see if kids can tell the time based on their shadow!) and Noah’s Arc, an old boat stuffed with more plushies, simply representing the innocence of childhood.

As Guyton often says, Whitfield shares, “You can take a lot of lessons about creativity from children. They are not inhibited. They are free to do whatever their heart tells them.” And, she adds, with a polite “Hello, Mr. Guyton,” they’re usually the only ones who can interrupt the artist, who’s often at work on site, “and get away with it.”

“Just remembering that very basic principle of respect,” she says, “The door gets opened quite wide.”

A few tips before you go

Heidelberg is definitely unlike your standard museum! So, Whitfield says, here are a few key things to keep in mind during your visit.

So many attractions, both houses and lots, pop at HP. Here’s a little list of some of the standouts – and a bit more context to share with your kids while you visit.

Note: Unfortunately, in late 2013, three houses at Heidelberg were burned to the ground, including the OJ House (which stood for Obstruction of Justice, a nod to HP’s blows with city government in 1991 and 1999, when the city tore down parts of the project), the House of Soul (which was covered with vinyl records and just errected earlier in the year) and the Penny House, which was to be the future home of kids’ and community programming. Art is already rising from the ashes, and HP organizers are working hard to protect the project.

Also, take a peek at the bright yellow Detroit Industrial Gallery at 3647 Heidelberg St. It’s the residence and studio of Tim Burke, who turns wood beams from abandoned warehouses into lanky Krazy Kats, while old F-18 fighter jet parts and other metal materials become bizarre robots. “This is all lived-in stuff,” Burke says. “They’re whimsical. They’re childlike – for all of us.” See what’s new outside; he also offers tours, by appointment, for $2 a person.

Heidelberg brims with layers of themes. Your kids will certainly have a load of questions on the scene. Here are some questions and ideas to spark exrtra conversation – during or after your trip – pulled from a few of HP’s lesson plans and staffers.

Also, you can pair your learning with these HP-suggested resources (all available at its store, in the Number House, and in Heidelberg’s online The Dot Shop):