Animal Fun for Kids at San Diego in California 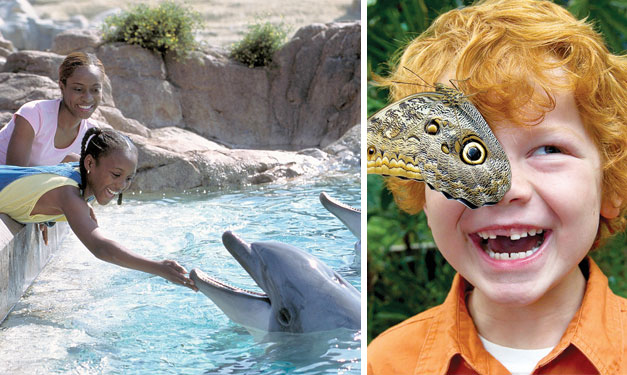 Stretching up to 50 feet and weighing in at 80,000 pounds (that's roughly the same as an 18-wheeler!), gray whales work their way down the U.S. western coast from Alaska to Mexico each year. Their journey takes them past the San Diego coastline in January, making it a prime time to enjoy whale watching.

But prehistoric-looking whales aren't the only animals to see here. In fact, you can plan a whole San Diego vacation around them.

On the last Saturday of January, celebrate the migration of gray whales at the Big Bay Whale Days & Festival, a free event that runs 11 a.m.-3 p.m. at Port Pavilion on the Broadway Pier. Kids can walk through a giant, life-sized gray whale (don't worry, it only looks real), see live sea creatures, dance to music and eat at one of 50-plus food booths. Most activities are free, too.

The area also offers Big Bay Whale Days discounts at various restaurants, attractions and museums. Save on either Hornblower Cruises or Flagship Cruises. Both take visitors out for three-and-a-half hour whale-watching tours; kids ride free with paid adult admission and a coupon code from the Whale Days website.

The Maritime Museum of San Diego and the USS Midway Museum offer the same buy-an-adult-ticket-one-child-gets-in-free deal via Whale Days. The maritime museum boasts several historical tall ships and two submarines. And if you've never been aboard an aircraft carrier, tour the USS Midway – which is also home to 29 restored aircraft.

Your kids will have no trouble spotting a whale at SeaWorld San Diego. Of course, killer whales are the stars at this expansive sea park. Sharks, penguins, dolphins and sea turtles have their own exhibit areas, too.

But the real draw for families is the shows, which feature killer whales (yes, even Shamu) performing amazing feats right in front of you. Be advised: When the staff warns you the splash zone gets wet, they're not joking!

The 190-acre park also features five amusement park-type rides – from roller coaster Manta to the water-drenching Shipwreck Rapids. Admission rates as of 2014 are $84/ages 10-plus, $78/ages 3-9 and free/ages 3 and under; parking fees also apply.

The world-famous San Diego Zoo covers 100 acres and houses over 3,700 rare and endangered animals. In May of 2013, the zoo opened the Conrad Prebys Australian Outback exhibit to give visitors a feel for what it would be like to be Down Under. The highlight of the exhibit is a sprawling forest, which is home to the largest koala colony outside of Australia. Make sure to take your kids to see the pandas, too. While few exist in the wild, the zoo has seen a bit of a panda baby boom, including one cub born in July 2012 (spot him 9 a.m.-noon daily).

Half an hour north, explore the zoo's sister site, the San Diego Zoo Safari Park. Here, animals roam free and guests can see elephants, rhinos, zebras and a host of other creatures that live in areas that mimic their natural habitats, from sub-Saharan Africa to the jungles of South America.

Other nearby kid attractions

Looking to optimize your vacation to sunny San Diego? Try these side treks (note that all costs are accurate as of 2014; always check ahead for the latest).