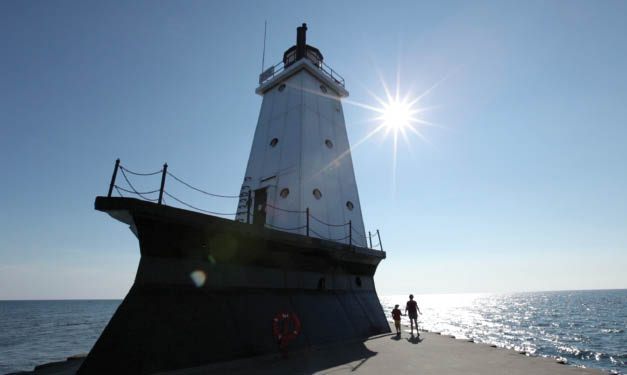 No two lighthouses are exactly alike. From the color of the light to the shape of the tower, these sturdy beacons are unique by design.

Lighthouses are to sailors what street signs are to drivers: They mark the path and let you know your location. In the daytime, sailors could tell where they were on the Great Lakes just by looking at the construction of the lighthouse. And at night, the color and timing of a lighthouse’s flash signaled to sailors which lighthouse they were seeing in the distance.

Even today, mariners on the Great Lakes use these lighthouses as much as they did years ago. While the lighthouse keepers are gone, the automated lights still help sailors find their way, acting as a backup for electric navigation systems.

Lighthouses can also provide your family with some direction – for a getaway! And, lucky for us, Michigan holds a treasure trove of lighthouses. With the longest freshwater shoreline of any state – or even country – it’s no wonder lighthouses line both the Upper Peninsula and Lower Peninsula. In fact, of all the states, Michigan has the most lighthouses with 129 still standing! Here are some of the best.

Note: Most times below are for August. You might want to call ahead to check the lighthouse hours, which are subject to change.

Floating lighthouses, known as lightships, were able to navigate deeper waters and other places where a navigation signal was needed, but building a lighthouse wasn’t possible. The Huron Lightship happens to be the last of its kind. Today, it’s a National Historic Landmark.

As the oldest lighthouse operating in the state, this 82-foot structure reopened in May of 2012 after undergoing renovations. Enjoy the winding 82-step walk to the lighthouse’s balcony for a view of Lake Huron. Save some time for the beach that sits just below the lighthouse.

First constructed in 1848 and then rebuilt in 1857, this lighthouse guided sailors through a treacherous stretch of water. But not all ships made it safely through the waters. There are at least 105 known wrecks credited to the stormy seas here, and more than 200 rescues took place while it was operational. The light keeper’s house now holds a museum for visitors to learn more.

Now part of the Tawas Point State Park, this lighthouse juts 70 feet into the Michigan sky. Take your time going through the attached museum – and plodding up the 85 steps to the top of the tower.

This imposing 1840 lighthouse is one of the oldest on the Great Lakes. Make sure to take your camera up the tower to snap amazing views of Lake Huron.

Tucked into trees lining Lake Huron, the Forty Mile Point Lighthouse was first lit in 1897, guiding sailors through the treacherous waters between Presque Isle and Cheboygan.

Currently, the Great Lakes Lighthouse Keepers Associations is in the process of restoring this 1880 sentinel, which is still open for visitors. One unique feature: Instead of being on the water’s edge, this lighthouse is located in town.

Stop off at this beauty before venturing across the Mackinac Bridge. The 1892 lighthouse is the perfect spot to view the Straits of Mackinac. Hands-on exhibits will teach your kids more about what it was like to live and work in a lighthouse.

This quaint lighthouse is tucked right into the peninsula jutting out into the middle of Grand Traverse Bay. Explore the area, take a tour and pack a picnic for a relaxing afternoon.

As part of Leelanau State Park, this lighthouse museum has a number of exhibits to help your kids understand the importance of these beacons to those on the shorelines of the Great Lakes.

This gem of a lighthouse can be a little difficult to find, but it’s worth making the effort. The picturesque tower is one of the most photographed lighthouses in the country. Nearby, you can make your way through Sleeping Bear Dunes National Lakeshore.

The imposing Big Sable Point Lighthouse stretches 112 feet into the Michigan sky. Take your time trekking the 130 steps to the top of the tower and then relax with a walk on the beach afterwards.

Just down the way from the Big Sable, the Ludington North Breakwater Lighthouse stands at the end of a half-mile break wall. The 57-foot tower is the perfect spot to watch the sunset on Lake Michigan.

One of the most famous lighthouses in Michigan, the Whitefish Point Light is only 15 miles from where the Edmund Fitzgerald sank. The important lighthouse is still in operation, and is part of the museum as well, since it is the oldest lighthouse on choppy Lake Superior.

This post was originally published in 2013 and has been updated for 2016 by Shelby Stewart.