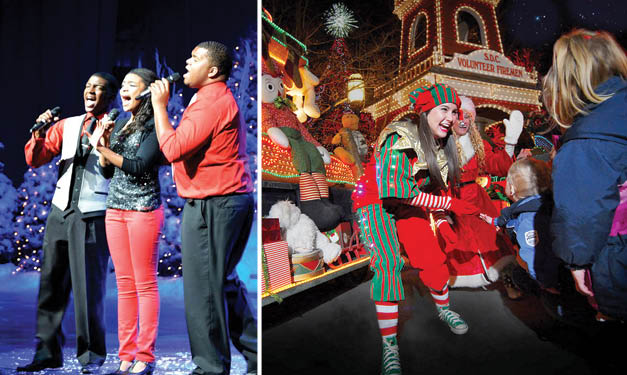 Mix all the lights and glitz of the Las Vegas Strip with the sensibilities and heart of the country music scene and throw in plenty of other live shows – and you've got Branson, Missouri. Tucked in the Ozark Mountains, the area has been a popular destination for families since the turn of the century, but it underwent a tourism boom since the 1980s when it added theaters, museums and more. Today it calls itself the "live music show capital of the world."

Around the holidays, which any local will tell you starts Nov. 1, Branson turns into a tribute to all things Christmas, drenched in decorated trees, lights and special performances. Step into the celebration!

To see the best of Branson in one place, spend a day at this combination theme park, shopping center, cave tour and entertainment hub. The 100-acre complex feels like a city when you step inside – 30 thrill rides dot the outer edge, including seven roller coasters. Rides are open through December, though some close if temps dip. Plus, shop over 100 craftsman stands, demonstrating everything from glass to pottery making. Part of your admission price – $59/ages 12-61, $49/ages 4-11, free/3 and under – includes a Broadway-style show.

At night, 5 million-plus lights crisscross the park. At dusk, line the streets for Rudolph's Holly Jolly Christmas Light Parade featuring the famed reindeer and pals. And you can't miss the five-story Christmas tree, blasting carols by day and 250,000 LED lights at night.

It may seem out of place in the heart of the Midwest, but the Titanic Museum Attraction – designed to look like the ill-fated vessel – is a must see. Its somber 1912-era history is given a lighter touch for kids with interactive exhibits that allow kids to steer the ship and shovel "coal" into the boiler. The captain greets visitors as they enter through an iceberg holed up in the ship's bow, and guests are given a boarding pass instead of a ticket. For Christmas, the replicated Grand Staircase is strung with garland and other period decor. Admission is $21.57/adults, $10.77/ages 5-12 and free/4 and under; family passes are $62.84 (reserve online).

Add the World's Largest Toy Museum to your itinerary, too. With more than 1 million toys on display, introduce your kids to some classics, from the evolution of Barbie to action figures over the years. Tickets are $9.99/adults, $7.76/ages 7-17 and free/6 and under (online discounts).

Spend time outside, too, on the old-time Branson Scenic Railway. The 40-mile round trip takes just under two hours and goes through the Ozark foothills. Or sign up for The Polar Express (hurry; slots sell out fast!). Tykes come dressed in jammies, meet Santa and enjoy hot cocoa. Tickets start at $34/adults and $24/ages 2-12. Regular excursions: $26/adults and $15.50/ages 3-12.

Two hour-long drive-through displays are available, too. The first is Shepherd of the Hills Historic Homestead's The Trail of Lights, which includes two-and-a-half miles of animated scenes and music. It's $12/adults, $6/ages 4-16 or $45/car. And the city of Branson sponsors its own Festival of Lights with 175 various displays at about $15/car.

There are hundreds of theatrical treats in Branson. If you can only see a few, though, try these.