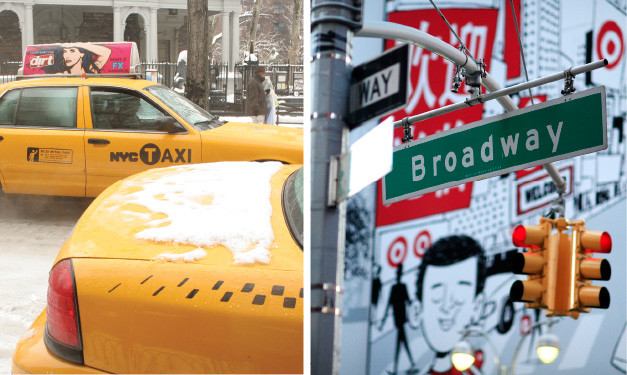 The honking car horns, rush of people and swoosh of taxis come together to create a rhythm and sound so unique it can belong to only one place: New York City. But the heart of this vibrant city soundtrack is Times Square. With its building-sized billboards and lit-up Broadway marquees, this icon is worth seeing with your entire family.

And don’t worry – even though NYC is known as the city that never sleeps, your kids will have no problem dozing after a day exploring! Here’s what to do and see in Times Square.

How to get around

New York City is set up like a grid, with a cross hatch of streets and avenues. Once you’re in the city, keep in mind streets run east to west, while avenues are north to south. The distance between avenues is much greater than between streets. In other words, if you get directions going five street blocks up, that’s not much of a walk, but five avenue blocks, and you should think about hailing a cab.

Broadway cuts diagonally right through this grid, with Times Square officially at the meet-up of Broadway Street and Seventh Avenue. Dotted along this stretch you’ll find a tourist mecca full of theaters, shops, restaurants and everything in between.

Now, despite their reputation, New Yorkers are fairly welcoming and won’t mind pointing you in the right direction. That said, you can make your explorations a little easier by choosing a hotel in or near Times Square.

And when you do venture around the city, don’t be shy about getting a cab. A taxi might be the best bang for your buck anyway, because a one-way subway ticket costs $2.25 per person (kids 44 inches and under ride free with a paying adult). Those costs can add up fast. The fares for taxis are regulated; plus, if you’re not sure where you’re headed, you can simply hail a cab, climb in and tell your driver where you want to go.

Of course, Broadway is known for its fabulous theater productions, so you may want to make a show part of your visit. You’ll find plenty of options around Times Square – also known as "the theater district."

The best way to make sure that you get to see the show you want – and at a price you can afford – is to purchase your tickets ahead of time. Generally, prices start around $40 per person for discounted tickets and go up, averaging $80. If you buy your tickets at sites like New York Show Tickets or BroadwayBox.com, you can find a show your family might like – and available discounts.

There are other options, but generally, you won’t beat the price of pre-purchasing. For example, you’ll notice the red TKTS booth in the middle of Times Square that sells discounted tickets for the day of the show. They’re about half-off, but can be limited (so if you want to seat a family of five together, you might be out of luck). And half-off a regularly priced $120 ticket isn’t necessarily a bargain.

"RUSH," student and standing-room-only tickets are also choices, but difficult to get – and you’re likely to spend your day in lines instead of enjoying the city.

To get the most out of your experience, after the show, go around to the side or back of the theater. There, many of the actors in the performance are available to sign autographs or pose for a picture.

Just walking along Broadway, you’ll find an array of one-of-a-kind stores. But with kids, there are a few Times Square spots you won’t want to miss.

Since opening in 2001, the 110,000 square-foot the Times Square Toys "R" Us has become the destination for kids – and grownups that want to relive their childhood. Along with a robotic T-rex, Candy Land, a LEGO replica of New York City and more, take a ride on the indoor Ferris wheel. If you go mid-day, you’re likely to wait in a long line to get a spin – so aim for a morning or evening visit.

You might also want to stop at the Hershey’s Store for a treat.

Finding food on a budget

Food costs can add up in Times Square. Instead of eating at sit-down restaurants for all of your meals, try mixing in some visits to one of the many delis or pizzerias and eating outside on a bench.

Perhaps one of the most overlooked eateries in Times Square is one of the most obvious: McDonald’s. It’s not terribly unique or trendy, but it’s one of the least expensive meals you’ll find – and you can seat yourself next to a window on the second floor and watch the city go by. (Plus, there are clean, easily accessible bathrooms here.)

To get an authentic taste of the city, drop by Roxy’s Delicatessen (1565 Broadway St.). While you can sit down for dinner – and the portions are huge – a little-known secret is that you can get cheesecake there, to go. Visit the counter at the front of the store to order a slice (and when I say slice, the size is equal to about four anywhere else – and can easily feed that many!).

New York City has a reputation of being a hustling, busy city. And it is. But it’s also a great place to take kids – especially if you include Broadway in your plans.