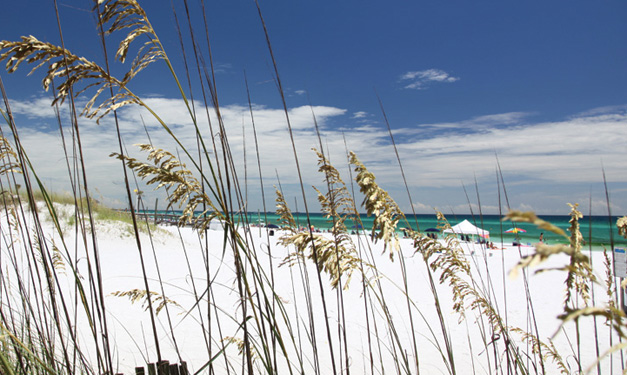 It's not the word you ever think you're going to yell for real while on a vacation with your kids. "Shaaaaarrrk!" I squealed during a recent trip to the Emerald Coast in the Florida panhandle, where sparkling green waters and soft, white sand meet around Destin.

The goal of our "adventure south without the mouse" crystallized in that moment: creating nature-based vacation memories in Florida.

Zach, 12 and Jimmy, 10, have already had fun at places like Sea World, Disney and Ripley's Believe It or Not. And they enjoyed the Magic Kingdom, Shamu and "Are they real?" displays of the weirdest things on Earth.

But this vacation was going to be different: Enjoying what the ocean, sand, seashore and swamp had to offer, instead. Here's what we discovered.

Our adventure began with deep sea fishing with Swoop II (there's also a Swoop I). The six-hour trek is a commitment but well worth it at $55 for adults and $45 for kids 12 and under. Take a brown bag lunch and a couple of drinks – you'll be too busy for anything else!

On a sunny, 80-degree April morning, we set sail on our 65-foot-long vessel, about 20 miles off the shore of Destin. The boys, especially Zach, had done surprisingly well being patient during the 1.5-hour trip out to our fishing spot with about 40 people ready to drop line along the sides.

I earned mom-points weaving raw squid on our hooks, and we laughed clutching our you-drop-it-you-bought-it $250 fishing poles as we let out our first line. But the moment a shark broke through the navy blue waves – and latched onto Zach's bait – it was all mom yelling for help. Zach gasped, "It's a shark!" under his breath.

He kept calm as he reeled it in and I frantically summoned the crew. They wouldn't land mini-Jaws in the boat, as the shark flipped its tail and banged against the side. But we made our way back with a great fish tale and plastic baggie of little snapper fillets ready for a Michigan fish fry.

On other tip on this trek: Be sure to check the weather before booking, because tickets are non-refundable.

If there was a theme to our adventure, it proved to be dolphins. A couple years ago, we'd tromped across southeast Florida's Melbourne Beach with a locally based naturalist to see sea turtles nesting. It's a not-to-miss adventure-of-a-lifetime at the Archie Carr National Wildlife Refuge. (For a virtual tour, visit Tour de Turtles to follow sea turtles' three-month migration starting in August.)

As soon as we mentioned going to Florida again, though, both boys talked about swimming with dolphins. As I searched guide books and blogs, I found most interactions happen in the not-so-natural environment of giant fiberglass pools. Determined to stick to the plan, I kept looking.

The result was a highly touted but disappointing trip – by dolphin standards – on a smaller boat to swim with dolphins in the wild with Blue Dolphin Tours. In gray skies and blowing drizzle, we set off in six-foot swells. Our directions: Our captain would maneuver the boat near a pod of dolphins and shout for us to jump in.

But the dolphins disappeared as soon as they heard the slapping of our bodies on the surface – a distress signal that something's wrong in dolphin-speak. Another deckhand on the boat said it's easier to get close and slide off the back of a personal watercraft in less wavy conditions. We wished someone would have told us that before we shelled out the cash!

While disappointing from the dolphin perspective, the trip became another adventure when our boat pilot decided to hunt for his dinner. So as the boys and I snorkeled around looking at urchins and fish below us, they were also entertained by our captain spearing a flat-eyed flounder and breaking off crabs' claws for his food. Who needed character breakfasts?

If you want to take a chance on swimming with dolphins in the wild – or just take a fun, $49 ride on a six-passenger boat to snorkel along the coasts of Panama City Beach – give this option a go.

For dolphin experiences with little ones, try Southern Star Dolphin Cruises, a glass-bottomed boat cruise on a sturdy, tug-like ship. Tickets are $29 for adults, $15.50 for ages 4-14 and free for kids under 4.

Another character along our adventure turned out to be Captain Mike of Pananma City-based Airboat Adventures aboard the "Swampvette" – a sure treat for Detroit gear heads. With an eight-foot propeller whirling behind him, Mike's part-naturalist, part-historian, part-swampman and part-boat-pilot entertaining 20 or so adventuresome souls on a trip up the Intracoastal.

After whizzing down the river-like waterway, he jumps the 10-by-20-foot craft and its Chevy 454 high-output engine along the swamp's sandy edge – or whips it into a doughnut, washing a wave over the bow. In between, he weaves in facts about the waterway and the critters that live there or local history lessons.

Catch a few alligators sunning themselves in the wild along the way – and meet a live one up-close at Swampvette's headquarters back by shore. During the summer, take a night cruise to see gators eating, too! Costs run $22 for children up to age 12 and $29 for adults.

The best adventure of the trip, though, turned out to be a kid-friendly cross between snorkeling and scuba diving, called Snuba. We took a large dive boat out along the shore with a group of snorkelers with Destin Snorkel, clad in wetsuits they provided. Once anchored along shore, we strapped on weights, dive masks and flippers.

Standing in chest-deep water, they showed us how to use the breathing mouthpiece that's hooked via a 20-foot tube to a raft carrying our oxygen tanks. During the training, Jimmy easily began bouncing up and down, breathing underwater, excited about seeing what was underneath. Then we swam over to a gradual drop-off and headed down into the sea.

The experience of truly being underwater was so exciting that Zach said he wanted to learn to dive when we got home. Tickets were $75 for adults and $55 for children ages 8-12 – but in spring, when we went, the shop was offering a half-off Groupon (bonus).

Hanging out, lodging and food

Surprisingly, the boys loved simply climbing trees and hunting for shells during some down time at St. Andrews State Park in Panama City Beach.

And just hanging out, wave jumping at the beach outside our condo at SunDestin resort – book and umbrella drink in my hand – was another highlight for all of us. We found our beachside lodging through Resort Quest of Northwest Florida. Expect to pay $900 to $1,800 a week for a condo on the beach depending on the time of year, but you save money on food costs with in-suite kitchens. Or check Orbitz or other online suppliers for hotels in the area.

For an unforgettable meal, old-world Florida-style at a true fish shack, visit De
wey Destin Seafood, with its motto, "Any fresher and it'd still be moving." Visit the original open-air dockside location overlooking Crab Island, too.

We didn't have time to fit in paddle boarding or snorkeling, two popular ways to see the natural sights. And word to the wise: Buying a couple of sets of snorkel gear at Costco before we left wasn't actually necessary – most outfits provide all the equipment you need.

We were sad to miss the re-opening of Florida's Gulfarium, a mini-version of Sea World in Fort Walton Beach that had closed for improvements and a new swim-with-the-dolphins adventure this summer. After tapping on the glass of a dolphin enclosure at a similar park, Gulf World in Panama City Beach, and having the dolphins flapping their flippers back, I regretted not arranging a swim for the boys.

We're glad we didn't stay in Panama City Beach after we saw some drunken spring breakers wandering around the strip – and heard stories from friends who stayed there. The family-friendly beaches and low-key resort feel of Destin were just the right for us.

We drove the 19-hour trip straight through, but would probably stop halfway next time. Or fly into Pensacola Airport, about 50 miles away.

I was worried about remnants of the April 2010 oil spill. But that happened a little further west of Destin. But I don't know that we'd take a chance on the weather in the panhandle during spring break again, unless the region was seeing more record-setting heat. The area can get downright chilly in March. But the region serves as the "Up North" for southerners during the summer. That might be a better time to visit to guarantee a good-weather vacation.

After our deep sea fishing, the air boat ride, Snuba and ventures into nature, Florida's Emerald Coast gave all the nature-based Up North trips we've ever taken a run for the money. Plus I heard Zach tell friends, "The first fish I caught in the ocean was a shark!" after we got home.

It's the ultimate fish tale.