Kayak fun, tall ships and tales of the sea are all experiences families must check out on a vacation to Erie, Pennsylvania. 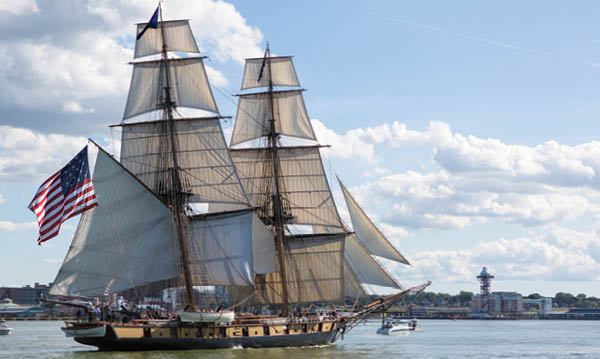 Traveling east along Lake Erie, there’s a slim finger of land that tugs at the coast, looking like a claw pointing back toward town. That sliver protected the city of Erie, Pennsylvania, helping make it a sailing and shipping haven – which also propelled it to into seafaring history. For a quick weekend by the lake that’s only a four-hour drive from Detroit, this is the ticket (remember your swimsuits!).

You could easily spend your entire weekend in Presque Isle State Park (free). Drive from one end to another, first, to get your bearings. Start by exploring by land – you can choose from 15 hiking trails. Most are fairly short, like the Duck Pond Trail, which is right around a half mile. Or take the paved Karl Boyes Multi-Purpose National Recreation Trail. You can bike the 13.5-mile trail in about 90 minutes (bikes are available to rent, or bring your own).

Next, take a break at the beach. There are 11 miles of them – the views and soft waves make it feel like you’re near the ocean instead of by a lake. Bring little baggies so your kids can collect sea glass as you stroll.

Our favorite thing to do was venture out on the water. Kayak and canoe rentals are available at a couple of places, including Lake Erie Outfitters and Presque Isle Canoe & Boat Livery, which is right in the park ($17/hour single kayak, $24/two hours). You can take the boats out on your own or join a guided tour of the lagoons and Misery Bay.

Our guide gave a rousing history of the region as we paddled. We learned how the area – and isle – figured into the War of 1812. Several ships were built in nearby Presque Isle Bay, while sick soldiers were quarantined later in Misery Bay to prevent the spread of smallpox. Many were buried in Graveyard Pond. And yes, it’s all a bit eerie (no pun intended – really). Even the mossy greens that skimmed the water’s surface when I was there looked ominous.

Delve deeper into the area’s history at the U.S. Brig Niagara Erie Maritime Museum. Inside are several permanent exhibits that let kids get the feel for what life was like for sailors in the early 19th century. Take your time walking through the officer’s cabin or checking out the old-time diving suit.

The highlight is outside, though, where the two-masted U.S. Brig Niagara is housed. The tall ship is a reconstruction of the original. It still sails the waters around Lake Erie, acting as a training school for would-be sailors ($10/ages 12-plus, $5/3-11, free/2 and under).

Hankering for more lakeside action? Sept. 8-11, Tall Ships Erie comes to town. During the four-day festival, which includes live music, tours and kids activities, there are around seven to 10 tall ships available to tour.

Erie offers other fun activities that’ll have your kiddos wanting a longer stay.

Erie Zoo. From red pandas to two-toed sloths, jaguars to African lions – your kids can have their fill of animal sightings from a worldwide assortment of creatures.

Romolo Chocolates. Since 1926, the Romolo family has been perfecting its chocolate chops. In 1994, they started out in Erie and quickly became a local legend.

No need to carve your pumpkin this Halloween. Here are some fun no-carve pumpkin ideas to try with your kids.
Read more
Guides