Family Trip to Boston for a History Lesson 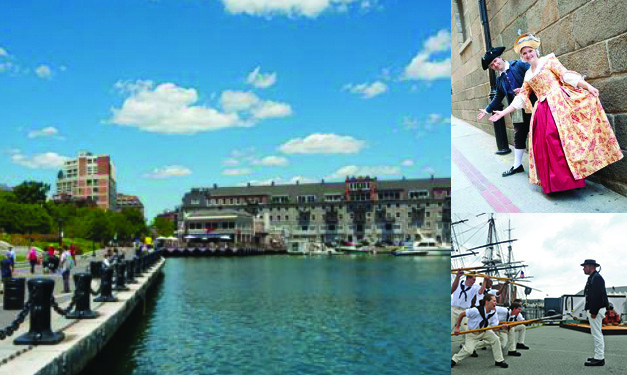 Boston knows how to throw a party – they've had more than 200 years to perfect it! The city, colonized by the Puritans back in 1630, was the site of some of the nation's pivotal moments leading up to the American Revolution – including Paul Revere's midnight ride warning, "The British are coming!"

You don't need to break out a textbook to brush up before your visit. Boston takes pride in helping history come alive for visitors – especially kids. Most of its popular historical sites have guides on hand to answer questions and relay stories about the events and people from the early days of the United States.

What if someone from 1775 was able to guide your kids through the events that shaped our nation? That's the goal of The Freedom Trail. The 2 1/2-mile walking tour goes right through downtown Boston and is marked with a red line, so there's no way you can get lost along the way. You can traverse the path on your own or have a costumed guide lead the way. The trail includes 16 historical sites, like the Bunker Hill Monument, the Paul Revere House and the Old South Meeting House (where Bostonians met in 1773 and then went to storm the harbor as part of a certain famous tea party).

The 90-minute public tours start on the hour, every hour, beginning at 11 a.m. at the Boston Common Visitor Information Center. Prices are $14/adults, $12/students and $8/ages 12 and under (discounts available when you order online).

This massive warship, which happens to be the oldest of its kind still afloat, is docked in Boston Harbor on one end of The Freedom Trail. Make a point to step inside, though, instead of just walking by. Launched in 1797, the 5,600-pound frigate once carried around 500 Marines and was given the name "Old Ironsides" after a decisive battle against a British vessel in 1812.

The ship is free to tour, and active duty U.S. Navy sailors are here to answer your questions. This summer is the last time you'll be able to tour the U.S.S. Constitution until 2018; the ship is going back into dry dock for repairs in early 2015.

British soldiers and American colonials first exchanged shots on April 19, 1775 in Concord, Massachusetts – launching the battles that lead to the American Revolution. The event was then made famous by poet Ralph Waldo Emerson as "the shot heard round the world." Get the basic story at the Minute Man Visitor Center. Watch a free, multimedia theater program called The Road to Revolution; then walk along the Battle Road Trail, a forested area where the British and colonial soldiers' skirmishes took place. Various guided tours and demos happen daily.

During July, Boston has a weeklong celebration to mark the Fourth of July. Called Harborfest, there are more than 200 activities taking place throughout the city including parades, concerts, festivals, fireworks and more.

Once you've soaked in Boston's history, explore the city's family-fun side.

Plan to visit at the official website for Boston.