Find Your Inner Caveman in Missouri 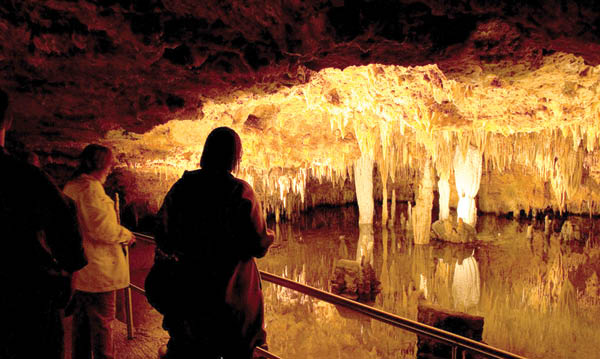 Stepping into a cave, the air feels heavy. The cool, damp stone all around seems both otherworldly and magical. For mini explorers, caves offer a peek into the inner workings of Mother Nature – and a great excuse to break away one last time before the school year starts.

To venture through rock and earth, Missouri tops most other states with over 6,900 recorded caves. Although you can’t visit every one, some are open to the public and have earned the title of “show caves” for their expansive tunnels and echoing caverns. To make the most of a visit to Missouri, nicknamed “The Show Me State,” head an hour southwest of St. Louis to see three large caves at different points along Interstate 44.

The hills on either side of the highway give little hint as to what’s waiting beneath them. Below the surface, the Meramec Caverns wind into the earth like an underground city of stone. The commercial 4.6-mile cavern complex is one of the most-visited in the state.

While you’ll get plenty of explanations of how the caverns were formed during your tour, make sure to ask about one of its most notorious guests. Legend has it the gunslinger Jesse James used the cave as a hangout – and hideout. Tours, which have lit pathways, take about one hour and 20 minutes and happen every 20-30 minutes daily (check online for current hours; $21/adults, $11/ages 5-11, free/4 and under).

Besides caverns, there are also riverboat rides and canoe rentals nearby. Your kids can even take a turn at panning for (fool’s) gold.

Fifteen minutes farther south, Meramec State Park includes wooded pathways that are lined with spindly trees that reach into the sky, creating a canopy of green. The sea of branches and leaves gives way to bluffs, rock formations and the Meramec River, which zigzags through the almost 7,000-acre park. Tucked throughout the park are more than 40 caves.

Take a guided tour of one of the most dramatic, Fisher Cave, where needle-like rock formations spider web all around you – and combine into columns that stretch 30 feet. Tours are at 9:30 and 11:30 a.m. and 1 and 3 p.m. through Aug. 31 and last about 90 minutes. For little travelers, be aware there are parts where they’ll be crouching (well, more of the adults in the group, really) and a few stairs toward the end of the tour. Flashlights are provided for everyone, so no worries if you have some with you who are afraid of the dark.

Onondaga Cave State Park sits just another 30 minutes farther down the highway. Tours start at the visitor center, which gives kids a look at how caves are formed before they set forth on this one-hour-and-fifteen-minute adventure that’s just under a mile. Highlights of the tour, which follows a lit paved pathway, include an area dubbed the “Big Room” that stretches over a football field in length and “The Twins,” so called because they’re a pair of massive columned stalagmites that gut up 20 feet. The Onondaga Cave is one of the more diverse show caves, boasting a river running through it and a designation as a National Natural Landmark ($15/adults and ages 13-17, $9/6-12, free/6 and under and park admission).