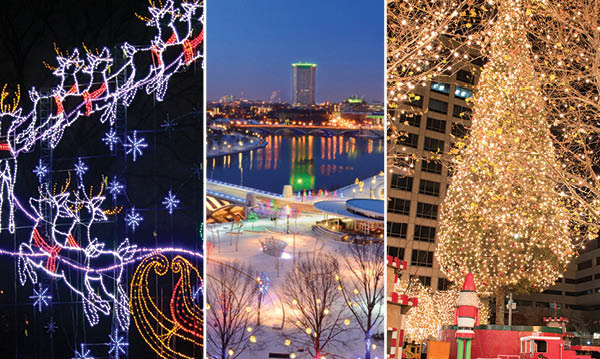 Shine Bright at a Hometown Fave

What do Santa and his reindeer look like reimagined in hundreds of shimmering LED lights? Your kids can see that – and more than 47 other bright, larger-than-life displays at the 23rd annual Wayne County Lightfest.

The southeast Michigan tradition is the region’s largest (and longest) drive-thru light display. That’s right: You don’t even need to get out of your car to see the show, which follows a four-mile path through Hines Park.

“I look forward to Lightfest and the joy and excitement that it brings to families during the holiday season,” county executive Warren Evans says. “Lightfest has become a cherished and much-anticipated tradition for so many people.”

Lightfest twinkles through Dec. 31 (it’s closed Christmas Day). Make sure to have your kids bring their wish lists: The big guy in red is at Santa’s Workshop at the end of the drive till Dec. 23. They can also post their letters to him in the giant mailbox – that’s if they’ve been good this year.

Each year Ohio’s capital city, Columbus, goes all out – not just decking the halls but a whole swath of the city. It’s appropriately dubbed Grand Illumination. Tracing Scioto Mile Park to Bicentennial Park along the Scioto River, which curves right into the city, more than 250,000 lights festoon 150 trees. Plus spot scenes of Santa and other delights projected onto spheres, which rise up from five fountains along the way. The displays and celebrations kick off 5-7 p.m. Dec. 2 with festivities, music and a visit from Kris Kringle. But you can visit any time, dawn till dusk, through Jan. 8, 2017.

Step into a Christmas Card

Did you know Kansas City, Missouri is home to Hallmark? No wonder it produces seasonal scenes worthy of Christmas cards. Take your pick. Now in its 87th year, County Club Plaza offers 15 blocks bathed with thousands of lights. Or go to Crown Center and marvel at the 100-foot mayor’s tree – it’s taller than those at the White House and Rockefeller Center.