I Hate Packing for Summer Trips 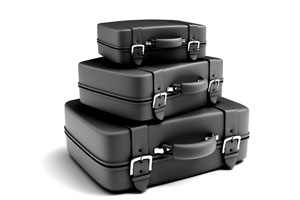 In recent years, we’ve been renting a house with my mother and my sister and her family on Lake Michigan. It’s a lot of fun to catch up with the family and get the cousins together again. This year we’ve even had more extended family come to visit. It’s been great!

The tough part was putting it all together beforehand so we’d be ready to roll once we arrived. My mother didn’t struggle with that. She packs for one and was probably ready back in May. My sister had a bigger challenge, as she lives in Virginia and also had to be prepared for the two-day drive as well.

For me, it’s usually not a big deal to plot what we’ll need, but leading up to this particular excursion a whole lotta messy life got in the way. We had five guests in town the week before we left. A four-day landscaping job took my money-grubbing contractor (as in "I can’t believe I forgot, but you’re also gonna need…") two and a half weeks to complete. Less than 24 hours before we were to leave, I was still negotiating the cost and worrying that they couldn’t possibly finish before we left. (They did, but I write this from Grand Haven, wondering if the new sod they threw down has shriveled into bitty chunks of straw in our absence.)

The final impediment to vacation planning bliss was my ever-traveling husband, who was to arrive home from a Los Angeles trip at 3 a.m. the Sunday morning of our departure. He was not going to be of help. I knew I’d be lucky if he was awake.

So let’s just say I was a little stressed out before our departure.

When I wasn’t in battle with the contractor, I was running around asking the girls to help me pack their bags with their favorite clothes, pajamas, beach toys, bathing suits, underwear, books, etc.

They answered by going into the room where I’d opened the suitcases invitingly, closing the door and vegging out on the Disney Channel. Grrr!

(A crew of six landscapers killing me in my yard and my own daughters foiling my plans inside the house. It was a day that will live in mommy infamy!)

But now we are here in lovely Grand Haven. It’s been a nice, sunny, restful week.

We could have done a little better on the packing, though. My sister and her husband were astonished that they brought zero beach gear, although they own it just for this annual trip. The girls did a good job, though Suzi swore she’d put pajamas in her bag and they never showed. My mom left the bag of coffee she’d been talking about since June in the trunk of her car, along with a bag of onions that are no doubt imbuing her sedan with an interesting odor as they cook in the August heat.

Me? Well, after reminding the girls a hundred times to bring at least two pairs of shoes, I only brought one – my clunkiest pair that aren’t really good for the miles of walking we’ve been doing.

But how can I complain? At least we’re on vacation.