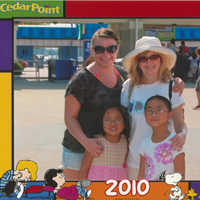 One of the first things I wanted to do with kids, once I had some, was to go to amusement parks.

As a little kid I experienced some, but my mom wasn’t into rides, and so we didn’t do much once we got there. I was about 7 when we went to Disneyland and did NOT ride the teacups. I mean, what’s the point of going if we couldn’t ride the coolest looking ride they had??

When I was 15, my daredevil friend DeDe took me to Cedar Point – and I learned how much fun amusement parks could be. On my first visit she took me on the Blue Streak roller coaster. With the lax safety standards of the time (measly lap belts across bench seats), I felt certain I would fly out of the car on every hill. Then she dragged me to the Corkscrew, which turned upside-down spirals all over the park. I was a little shaken, but I was hooked.

Although DeDe was much more physical than I was, I learned that amusement parks really level the playing field. I could do everything she could do! There was no ride I wouldn’t tackle. Well into my 20s, I went at least once each summer.

But then the thrill was gone. I needed to have my own kids to take. So I waited and waited and then jumped the gun.

When my daughter Patti was just 2, I dragged her, my sister and her girls to Cedar Point. My nieces hit the 310-foot-high Millennium Force and screamed their hearts out. But there was little Patti could do. She was only 2!

I tried again when she was 3. But it wasn’t much more than a long, hot, expensive day spent pushing a stroller around.

Then Suzi came along and summers were so busy. I forgot all about Cedar Point.

This August, I decided it was time to try again. I invited my niece Trese, along with my girls, now 7 and 9. The drive to Sandusky told me this was the beginning of an all-new Cedar Point tradition. Trese played Miley Cyrus songs off of her cell phone. As we all bopped along Route 2, I was warmed by memories of bopping along Route 2 with DeDe, long ago, listening to Fleetwood Mac on cassette tapes.

I got so caught up in the spirit, I convinced Patti to ride the Blue Streak, now one of the tamer rides in the park. I soon realized that nothing gets those Mama-Guilt juices flowing quite like seeing your child scared to death after 20 seconds of a ride you talked her into, with another 120 seconds of ride left to go! What was I thinking!? She’s only 9!

But Patti is a champ. It took her a while to recover from her Blue Streak trauma, but she bounced back with a vengeance. By the end of the day she had ridden the Mine Ride twice and the Iron Dragon three times! My daughter the daredevil!

Suzi had a great time too, on the Ocean Motion, the sky ride, train and all the Snoopy rides. And my niece was a patient wonder, helping me with the girls on the easy rides, but going on a few death-defying ones herself.

Driving home near midnight, I was happy just to be the mom, with the kids spent and sleepy, trying to stay awake in the backseat.

Sure, the terrifying new rides at the park tell me it’s time to retire my daredevil spirit and enjoy their thrills from the sidelines. But I’ll always have the Blue Streak.