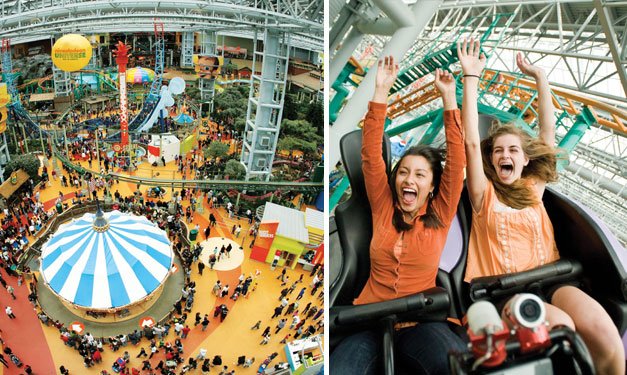 My kids usually look forward to going to the mall as much as they do the dentist. Sure, there may be some shops that they’re interested in – but going from one store to another with mom, especially during the holiday season, holds no appeal. Unless you also pack the mall with but kid-friendly attractions like miniature golf, 3D theaters, an amusement park – and maybe throw in a shark or two. Welcome to the Mall of America in Bloomington, Minn., just outside Minneapolis.

Opened in 1992 on former grounds of the Minnesota Viking and Twins stadium, the Mall of America (known as MOA to locals) is a veritable family weekend getaway.

The 4,870,000-square-foot mall can be overwhelming to navigate. If there are shops you don’t want to miss (American Girl fans, take note!), find them on MOA’s website before you go. A couple notes for serious shoppers: There’s no sales tax on clothing or shoes, and it’s kept at 70 degrees year round.

In general, keep in mind what attractions you’ll find on the different levels. The first floor has an amusement park, thrill rides, an aquarium and other kid-friendly fun.

Hungry? Go upstairs. The second floor has restaurants and shopping, while the third serves up faster fare in two food courts. The 18-hole mini golf course is also on the third. Movie theaters and restaurants dot the fourth. Spattered among it all are more than 520 retail shops.

Perhaps the biggest draw for kids is right on the main level, front and center – Nickelodeon Universe. Themed around popular kids’ cartoons, it’s the largest indoor amusement park in the country and has 27 rides. Step into everything from Blue’s Clues to Backyardigans, Danny Phantom to Jimmy Neutron – and more. Don’t miss the Avatar Airbender roller coaster, known for its half-pipe design, or the Fairly Odd Coaster with its quick twists and turns. Buy an unlimited pass or pay per ride.

Take a dip – waterless, don’t worry – in the ocean by walking through the SEA LIFE Minnesota Aquarium. Come face-to-face with creatures like sea turtles, jellyfish, sharks and seahorses racing in a 1.3-million gallon tank. There are admission fees, though online discounts/combo packages are available.

A hotel is attached to MOA, but you can find lodging by most major chains within driving distance. Many offer drop-off and pick-up, so you don’t have to even grapple with mall parking. Check out MOA’s package deals for the best bargains; here, you can combine your hotel rate with various attraction tickets.

MOA includes several free, ongoing family activities. If you’re here early in the week, hit up Toddler Tuesdays, when kids ages 6 and younger eat free at participating restaurants. At 10 a.m. Saturday mornings, families can catch a flick for free; there are also sensory-friendly films available at the same time for those with children with special needs. The lights are turned up and the sound down while showing the films – and you’re welcome to dance by your seat at any time.

Get your kids excited about visiting the largest mall in the United States by sharing these mind-blowing fun facts: