Norfolk in Virginia has Maritime, Art Family Fun in October 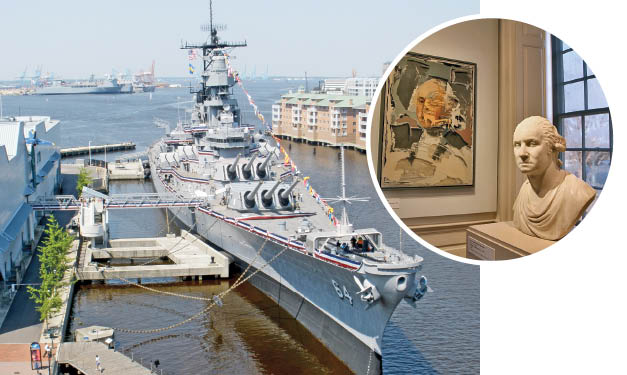 At the mouth of the Chesapeake Bay, just before it stretches into the Atlantic Ocean, lies the port city of Norfolk, Va. While the city is probably best known as the home of the largest naval complex in the world, it's also making a name for itself as a fun seaside destination for families. And when it comes to Halloween, Norfolk delivers both for treats and hair-raising frights by the sea.

Naval history and more at Nauticus

Nauticus is an expansive science and maritime museum that houses historical exhibits about the U.S. Navy plus interactive fun. Get your hands wet at the horseshoe crab or shark touch tanks – or learn about weather patterns via games and displays.

The real star of the Nauticus, however, is the Battleship Wisconsin, one of the largest and last battleships built by the U.S. Navy, docked right outside. You can go on a self-guided tour of top deck or pay more to go on one of two guided tours below deck (both are only for those ages 8 and up).

But for a truly frightening experience, explore the lower decks of the battleship – in the dark. Dubbed Haunted Ship BB64: Three Decks of Darkness, this "boo-ty" requires patrons to climb up steep ladders and through tight spaces as they search for the ghosts of past battles. It starts at 6:30 p.m. select Fridays, Saturdays and Sundays (usually right around the Halloween holiday). Be sure to check out the current dates, times and rates before you go. Ages 12 and up only on this one.

Norfolk by sea on boat tours

But the best way to see Norfolk isn't from land – it's seaside! To tour the area by boat, book a cruise aboard the Victory Rover. The rover has a two-hour narrated cruise of the area. Costs are right around $20/adults and $12/children; you can combine your ticket here with admission to Nauticus for deep discounts.

The least expensive option for seeing the city from the sea is the Elizabeth River Ferry. For about $1.50 a person, go aboard this commuter ferry that makes stops every 30 minutes between Norfolk and Portsmouth, just across the river

The Chrysler Museum of Art

Walter Chrysler Jr. bequeathed what is considered one of the single biggest donations to an American museum to this Norfolk gem, so it's no wonder it bears his name.

The Chrysler Museum of Art main building is stocked to the gills with works of art in glass, European painting and sculpture, modern art and ancient worlds, photography and much more. Note that in 2013, it's undergoing a major renovation and expansion (it reopens in April 2014).

But don't fret. If you're traveling here in late 2013, the too-cool glass studio is definitely worth a visit (don't touch!). Also, mini museums have been set up at the historic Moses Myers and Willoughby-Baylor houses. These sweet samplings of museum's best American art – from the likes of John Singleton Copley, Albert Bierstadt, Susan Watkins and Winslow Homer – are super manageable for families.

If you are in town on Halloween, be sure to stop by: The gallery hosts will be dressed up as their favorite works of art and handing out treats to the kiddos. Admission is free. It's open noon-5 p.m. Wednesdays-Sundays.

With average highs of 70 degrees in October and lows just barely in the mid-50s, you might want to plan some beach time, too. The city's Ocean View Beach Park is free – even parking – and open to the public.

Visit the Norfolk Convention & Visitors Bureau's website to learn more about the area – and start planning your family's trip.