‘Out of This World’ Family Travel Experiences in Idaho

Tour 'Craters of the Moon,' a nuclear reactor and more with your kids near Idaho Falls. 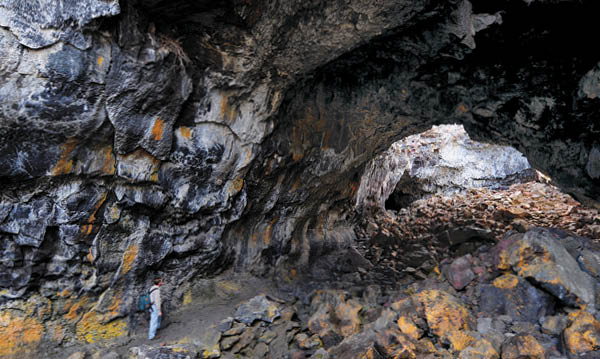 Getting tickets for the next passenger-bound trip to the moon is out of reach for most of us. But there’s no need for a spacesuit – or even a rocket ship – to feel like your family’s exploring a lunar landscape that’s been called “weird and scenic.”

Located 90 minutes west of Idaho Falls but seemingly a world apart, Craters of the Moon National Monument and Preserve sprawls 750,000 acres of what was once a gigantic stretch of volcanic explosions. Today, this area beckons wannabe astronauts and pint-sized geologists to pretend they’re not in Idaho – but walking on the moon.

Blast from the past

In 1969, at the urging of NASA officials, four astronauts from the Apollo 14 mission came to Craters of the Moon to prepare for their own space trip. While the pilots knew how to fly, they didn’t know as much about collecting rock samples. This lunar-like expanse was a perfect stand-in.

Your kids will notice the same surreal stretches of pockmarked earth with lava flows frozen in place and formations 2,000 to 15,000 years old. Unlike a singular cone-like volcano, the lava here was propelled to the surface through rifts, which over time left 25 volcanic cones and about 60 flows.

You don’t need a geology degree to figure out what happened – it’s easy for kids (and parents!) to tell where the lava flowed from one place to another. Have kids look for other lava signs, like tree molds, where lava incinerated a tree so quickly it left a “mold,” plus lava tube caves and cinder cones, where lava spurted up so violently and quickly it launched large chunks of earth into the air.

First, head straight to the visitors center. Kids can check out hands-on exhibits and load up on hiking maps. Park rangers answer questions and point out choice trails ($10/vehicle; 8 a.m.-4:30 p.m. daily till Memorial Day; till 6 p.m. in summer). Ask about the Lunar Ranger program – it’s the only one of its kind in the galaxy (really) and kids earn a cool patch for completing their “mission.”

Next, drive the park’s seven-mile loop, stopping to hike landmarks listed on your map. Two of popular hikes are Snow Cone and Devils Orchard Nature Trail. Both are paved. Another hot spot? Indian Tunnel. One of 400-plus caves here, it’s the easiest to reach, with a stairway leading into an 800-foot long tunnel. Inside, ceilings expand past 30 feet in some places and veer off into different chambers you can explore. You need a permit from the visitors center to enter (they’re free).

The closest place for basic lodging is Arco, 20 minutes northeast of the park. The sleepy town of under 1,000 also has a one-of-a-kind tour: the Experimental Breeder Reactor No. 1 (EBR-I) Atomic Museum. Or, in plain English, you can tour the world’s first peacetime nuclear power plant, which started generating electricity in 1951.

Take a self-guided tour of the facilities, open to the public 9 a.m.-5 p.m. daily from Memorial Day weekend through Labor Day from (free admission). Your kids will learn how nuclear power is generated and get an up-close view of reactors (don’t worry; they were decommissioned in 1964).

While there is limited camping in Craters of the Moon, your best bet for hotels is Idaho Falls. Try these fun stops if you’re in town.

ARTitorium. Kids can see and create masterpieces at this cutting-edge art space. Exhibits use technology to do everything from painting to performing. $5/ages 3 and up, free/under 3.

Reed’s Dairy. Go for a scoop of huckleberry, blueberry cheesecake or carameled rocky road or another ice cream scoop (or two) in a homemade waffle cone. Grab some chocolate milk for the road.