Pirate-Minded Fun for the Whole Family

Here's some pirate fun for your brood – from the Dossin Great Lakes Museum in Detroit to Good Fortune Mackinaw Pirate Cruise. 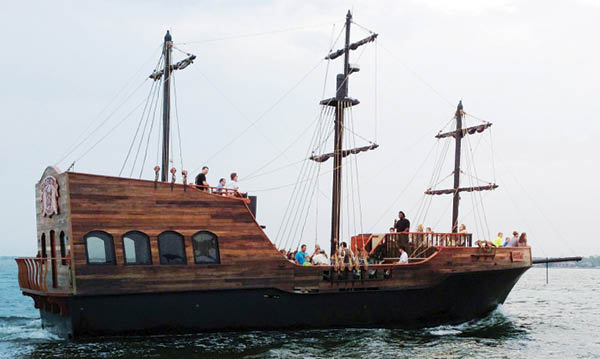 Ahoy! Ever notice the retro-looking building on Strand Drive on Belle Isle? It houses seafaring treasures aplenty (the cannons out front are a hint!). And, at the 16,000-square-foot Dossin Great Lakes Museum, it’s easy for wee scallywags to imagine they’re aboard a lavish pirate ship – particularly in the Gothic Room from the City of Detroit III, a massive steamer launched in 1911 that once rode the local waves and was the largest of its kind. Ditto the S.S. William Clay Ford Pilot House. While the rest of that freighter was scrapped, this salvaged exhibit lets kids grab the captain’s wheel and feel like they’re piloting the boat, especially since its windows overlook the river.

Got pint-sized pirates? Rebecca Salminen Witt, the Detroit Historical Society’s chief development and communications officer, says, “Be sure to visit our collection of model ships – it’s one of the largest known collections of scale model ships in the world. There were pirates that sailed the Great Lakes centuries ago, and their ships would have looked a lot like some of the models.”

All aboard the Good Fortune Mackinaw Pirate Cruise! On Saturdays in September, it sails the Straits of Mackinac. Along the way, little landlubbers learn how to talk – and walk – like a pirate. “Some kids start out very shy, but by the end of the adventure, they are singing and dancing pirates,” says “head pirate” Deidre Phillipson. “I love seeing the transformation.” Her favorite pirate saying? “We have no plank, mate. We just tie you up by your feet and make you swim with the fishies!”

Arm the cannons! Watch out for enemy ships! Your child lives a pirate’s life on the Scallywags ship, which makes waves in Erie, Pennsylvania. Kids become part of the crew, hunting down a treasure map (Captain Skull took it), searching for hidden booty and sipping a bit of pirate “grog” to refuel. This immersive experience involves singing, dancing and cannon fire – water cannon fire, that is.