Plan a Visit to Toledo, Ohio 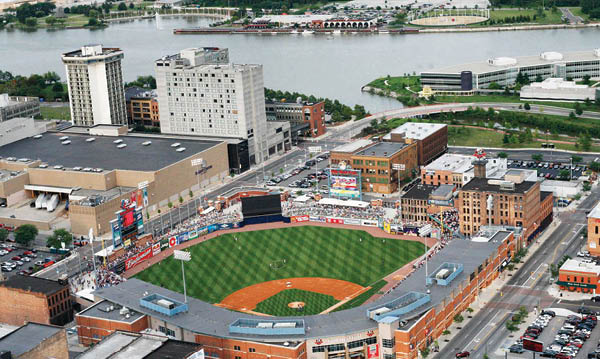 With all the charm of a small town, Toledo still has plenty of big city perks. Along with being home to one of the nation’s top zoos, it boasts a mix of unique museums, riverside restaurants and nearby Maumee State Park, which hugs the banks of Lake Erie. For a fun-filled family getaway just under an hour from Detroit, head south on I-75.

Start your explorations at the Toledo Museum of Art. Now through Sept. 6, the TMA has a special exhibit called Play Time, which gives your kids (and you!) a chance to step into art. In one gymnasium-sized, crocheted display that looks almost like a multi-colored spider web, visitors can go through holes of the suspended display or just sit and gaze at all the colors around them. In another room, a large helium-filled ball stalks you as you walk through. Hop on a swing and soar through the clouds in a display that projects images of the sky all around you so you really feel like you’re soaring. And the best part? It’s all free.

Experience another side of creativity by trying your hand at science experiments at the Imagination Station ($10/ages 13-74, $8/3-12, free/2 and under). My kids were literally blown away when they stepped into the simulated hurricane. But their other favorites included standing in as a human yo-yo, running like a rodent on a hamster wheel and stepping inside a house that tricks your mind into feeling like gravity is skewed.

Open now for barely a year, the new National Museum of the Great Lakes lets kids dive into every detail of seafaring in our region ($8/general, free/5 and under). There are displays detailing everything from fabled shipwrecks to wars on the waters. Cap off your visit by touring the S.S. Col. James M. Schoonmaker perched in the Maumee River next to the museum – one of the largest ships to operate on the Great Lakes. Your kids can take a self-guided tour of the captain’s quarters, walk through the kitchen and check out the cargo hold (a $12 ticket covers both the museum and ship).

Going southwest from downtown Toledo, take a right on Hippo Way to visit one of the country’s top zoos, the Toledo Zoo ($17/adults, $14/ages 2-11, free/2 and under). Opened in 1900, the zoo is prized for its diverse animals and exhibits. It was the first zoo to include a “hippoquarium,” where visitors can spy hippos under water – not just when they poke their snouts on the surface.

This year, the zoo reopened its aquarium after undergoing an extensive, three-year remodeling effort – which includes a 90,000-gallon exhibit dubbed The Reef where sharks and fish swim past. There are also several touch tanks to explore and a dark-room exhibit where you can see dozens of flashlight fish breezing by like twinkling stars.

Trade touch tanks for a stadium to observe another kind of animal: Toledo’s famed Mud Hens. The minor league team happens to be an affiliate of the Detroit Tigers, so it’s not unheard of to see their ranks grace the Fifth Third Field located in the heart of Toledo. Tigers fans will feel right at home, especially when players like pitcher Justin Verlander appear on the mound at this cozy stadium. The family-friendly spot has frequent promotions and deals (about $12/game).