Preparing Your Child to Fly or Travel Alone

If your kid is heading out of Michigan to a camp or grandparents' house this summer, here's what parents need to know to help make it smooth sailing. 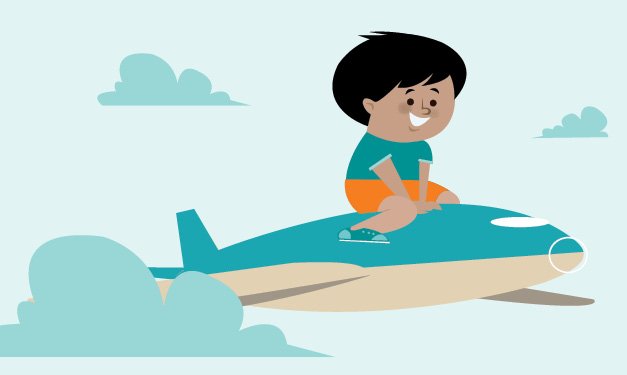 There are full-grown adults who shudder at the thought of getting on an airplane, but some southeast Michigan kids as young as 5 are flying the friendly skies – and going it alone.

If solo air travel is one of the “firsts” in your child’s future, there are some things you can do to help make sure your little traveler has a smooth journey from gate to gate.

The trend – and costs

While the number of kids who travel alone each year is not documented, the practice seems to be increasingly common, with the growing popularity of specialty summer camps that draw kids from around world – and with children spending summers away with an out-of-state parent or other relatives.

Airlines have varying policies on the minimum age for “unaccompanied minors,” as they are called, and rules that dictate the flights that children can take alone. Many require younger children take only nonstop flights and prohibit kids from boarding the last connecting flight of the day.

Extra fees ranging from $50 to $100 each way usually apply to cover special services for minors, such as supervision from the time of boarding until the child is met at his or her destination.

Southgate mom Christy Hinton says her daughter Hallie, now in her teens, has traveled alone often to visits relatives. Naturally, there is some worry involved.

“What if she gets sick, what if there are strangers? I worry so much more when she travels alone,” Hinton says.

To alleviate some of that worry, Hinton says she ensures someone will be there on time to pick Hallie up when she arrives at her destination, so that she will not have to wait at the airport.

When a flight is planned, it’s important to prepare the child for what to expect well in advance.

Dr. Elizabeth McCullough, a child psychiatrist based in Livonia, says a visit to the airport in advance of the trip can help minimize a child’s fear. She encourages parents to walk around accessible areas of the airport with the child and talk about the various features.

“Talking about the trip and showing your child that flying is not a scary process will help make the trip not only easier for him, but for you as well,” McCullough says, “since he will be in a good state of mind.”

Denise Katajamaki, formerly a sales manager at Cosmopolitan Travel in St. Clair Shores, says parents should get in touch with their airline of choice to learn about any fees and rules that may apply for unaccompanied minors.

“When you call and say you have a child traveling, they will take the information of the people dropping them off, picking them up, everything,” she says.

Although some airlines may allow children as young as age 5 to travel on their own, not all kids will be ready to fly alone at this age. Experts say a child’s individual temperament should be considered when deciding whether he or she is emotionally ready to embark on solo air travel.

“I wouldn’t send a child that’s really, really shy; they may have issues. You pretty much know when your child has independence,” she says, adding that her grown son frequently traveled on his own when he was younger. “You know when they’re ready.”

On a more practical level, local mom Aviva Gordan has found sending along some food and entertainment for her children goes a long way in keeping them content while traveling unaccompanied.

Gordan, of Oak Park, says her three tween and teen kids have taken various flights alone to attend summer camp and to visit their father in New York.

“One thing that I like to do is send with them their favorite snacks,” she says. “Also, remember to send a game or something for them to do on the plane – even adults get ants in their pants when there is nothing to do.”

Right before the flight

As with any air travel, it’s best to get a good night’s sleep beforehand and arrive at the airport with plenty of time to spare. It’s also a good idea to stay on site until you are sure there are no unexpected delays and your child’s flight has departed.

Children should have all boarding passes and any necessary forms of identification on them in a secure place, and it helps if young children are able to recite their name, address and phone number just in case anything gets lost.

Be sure that adults meeting an unaccompanied minor know to stop at the arrival gate to obtain a pass allowing them beyond the security checkpoint.

While it’s natural for parents to worry, Katajamaki – who worked in the travel industry since 1996 – says she has seen only positive experiences when it comes to airline personnel and unaccompanied minors.

“They take very, very good care of them. (Flight attendants) always come by, and the kids always get special attention,” she says, adding that children may even get a tour of the cockpit if time allows.

Katajamaki recalls an international flight where she says three young children were on board unaccompanied and received excellent treatment.

“They had (an airline employee) take them to the gate,” she says. “They all had their passports around their necks in clear plastic bags that had their names on them. They were put on the plane before anybody else.”

When the plane arrived in Detroit, Katajamaki says the kids were met at the gate by airline personnel who took them to get their luggage and ushered them through security. “They didn’t leave their side,” she says.

While things can go wrong, Katajamaki says good preparation and letting children know what to expect can help make for a smooth and enjoyable experience. “It’s pretty safe,” she says.

This article was originally published in April 2012 and has been updated.