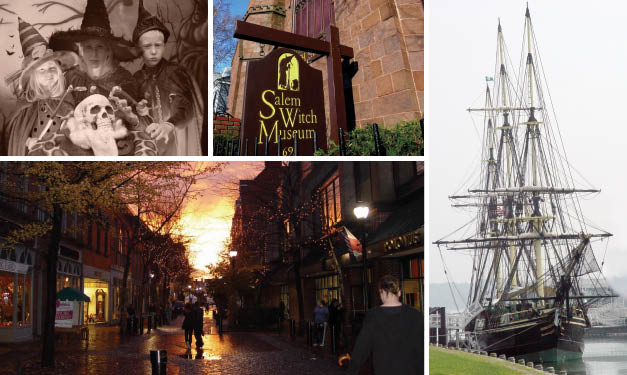 If you're looking for some spooky Halloween fun for your tweens or teens, take an October trip with your little goblins to Salem, Mass.

Epicenter of the notorious Salem witch trials of 1692, Salem is an inner-ring suburb of Boston: a 45-minute ferry or half-hour train or car ride to the city. And during October, the city bulges with Halloween revelers for haunted happenings.

Salem's creepy history begins in the winter of 1692, when a group of girls – including the 9-year-old daughter of a town reverend – became sick. With active imaginations fed by the servant Tituba's entertaining ghost stories, the girls begin telling others that they've been bewitched by particular townspeople.

Accusations begin flying back and forth, and the state created a court to try witchcraft cases in May. On June 10, the townsfolk hanged their first accused witch on Gallows Hill in Salem. By the time the governor dissolved the court on Oct. 29, 1692, a total of 19 people were hanged and one man was pressed to death when he refused to confess to practicing witchcraft.

The really peculiar thing about Salem is that a portion of the town aims to shun its storied spooky past, barely acknowledging the witch trials. The trials hardly get a mention during the U.S. National Parks Service Visitors' Center movie introduction to the area, which instead focuses on Salem's maritime prowess during the 1700s. Today, Gallows Hill, the site of the hangings, is actually a municipal park and with sports fields – with no mention of the witch trials.

But what turns out to be great for visitors is that Salem has condensed most of the witch trial memorials, museums, shops and tours into a walkable square-mile area in the center of town. On your first day of touring, you can pay to hop on a town trolley service for a day of rides from 10 a.m. to 5 p.m. An on-shuttle guide continuously points out to passengers both historic and horrific spots, along with beautiful colonial architecture along the way.

A handful of witch-themed museums mainly tout life-sized dioramas depicting the servant Tituba telling the girls ghost stories, one of the trials, one of the hangings and Giles Corey's pressing. You need only pick one museum to get the main gist. The original, the Salem Witch Museum, seemed the most accurate and least over-the-top.

For a real-life reenactment of a witch trial, see Cry Innocent in the city's stately historic Salem Old Town Hall. The audience serves as the Puritan jury as characters act out Salem's tale through testimony in the trial of accused witch Bridget Bishop. If the audience finds her guilty, be prepared to hear her screams as the whole group takes her outside and walks her through town in chains.

A worthwhile endeavor if you're looking for an evening of fright is one of the candlelight walking tours through town. Costumed guides tell historically based tales of local townsfolk being possessed and hauntings in local historic buildings. The tours end up in the city's main tribute to the witch trials; a park laced with stone benches bear the name of each victim.

True Halloween celebrations – including parades, costume contests, a Halloween Ball at the historic Hawthorne Hotel and more – take place throughout the month of October.

The festivities could entertain a family who loves Halloween for a couple of days. Otherwise, Salem's witch history is worth a day's visit any time during the rest of the year. For a kooky kick, swoop by Salem's Vintage Photography, where your family gussies up as witches and warlocks for a creepy mug shut. There's a sitting fee and extra costs for a photo CD (check here for current rates).

The area's maritime history actually proves just as fascinating and could fill up another day. The National Park Service offers tours of Salem's wharfs, government weigh-in facilities and local maritime buildings – not to mention the standout Friendship of Salem, a replica tall ship that's open for tours (be sure to call ahead).

And the schooner Fame, a replica of a privateer ship that commandeered mostly British shipping goods during the War of 1812, sails two-hour tours through Salem Harbor from Pickering Wharf.

A short walk down the road from the wharfs, Nathaniel Hawthorne fans can visit the harbor-front home and gardens that inspired him to write The House of Seven Gables.

And if you're headed north to Maine, Salem on the north side of Boston makes a great stopover. Just be prepared for your frightful visit.

You can reach summits without your feet leaving too far off the ground at these indoor rock climbing places in southeast Michigan.
Read more
Travel

Have an exciting spring break at these kid-friendly travel destinations.
Read more
Outdoors