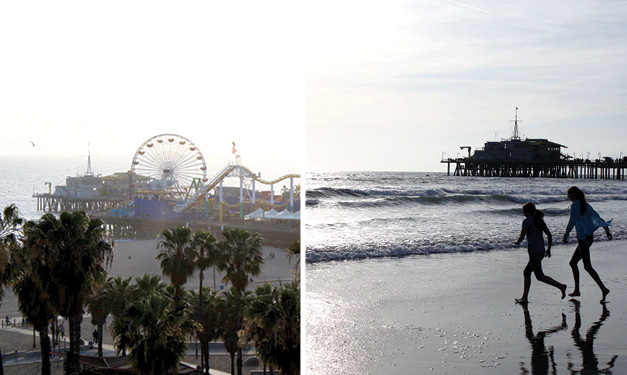 As the sun melts into the Pacific Ocean, bathing the waves and the beach with rays of oranges and pinks silhouetting the pier as it sets, Santa Monica, Calif. seems like the perfect set for a movie. With a trail that runs between Venice Beach in the south and includes Muscle Beach before stretching towards Malibu, Santa Monica has been a frequent backdrop for numerous films and TV shows.

When my family first made our way toward the beach, I couldn't help myself and started singing, "Come and knock on our door," from Three's Company (several seasons of the show's opener were shot here). My younger children were more familiar with the area from episodes of Disney's The Suite Life of Zack & Cody. And my teen immediately recognized the amusement park perched on the pier from Syfy channel's campy thriller Sharknado.

Your family can star in your own action-packed adventure during a weekend getaway to this sun-soaked spot.

Taking in the sights

Santa Monica's three-and-a-half miles of beachfront is lined with the smooth, paved South Bay Bicycle Trail (you can walk, jog or skate, too). It runs 22 miles and is the world's longest oceanfront bike path. We spent an hour riding north from the Santa Monica Pier toward Will Rogers State Beach (where it ends). In the other direction, the trail goes past Venice Beach and down the coast. You can find several places along the trail to rent bikes.

Biking or walking is the best way to get around. Parking spots tend to be hard to come by. Plus, most of the places you'll want to be are more accessible without a car.

Make your way to downtown Santa Monica and the Third Street Promenade. Part outdoor mall, part entertainment center, the pedestrian-only area is dotted with street performers. We stumbled on an act from a magician, two dueling guitarists and a film crew tapping a segment for E! channel.

The trademark Santa Monica Pier, built in 1909, is the area's hub of activity (the bike trail runs under it).

Pacific Park sits at the end of the pier. The family-friendly, admission-free amusement park includes a large, 13-story Ferris wheel with stunning beach views and enough other rides to keep your kids busy for the afternoon. The day we were there, Nickelodeon was hosting Kids' Choice Award attendees at Pacific Park. Unlimited ride passes are $24.95/ages 8-plus and $16.95/7 and under – but you can also purchase individual tickets and go on a single ride or two (2014 rates).

The pier has restaurants, shops and anglers, too. It also holds distinction as a historic site: Route 66, the roadway from Chicago to Los Angeles, ends at the pier (though there's some dispute about the exact ending point!).

A day at the beach

Schedule plenty of time and bring a big beach towel. In the morning, you'll see surfers trying to catch waves, and in the afternoon your kids can run in the waves. There are many lifeguard shacks on the beach, but watch for notices like rough waves and riptide alerts.

Another draw is all the activities – and people. There are parallel bars, swings, rings and workout equipment. We watched people working out on the rings for an hour; they were taking turns swinging from the rings before flipping (double flips!) into sand.

With so much on the pier, choose a hotel as close as possible to the beach. Several line the beach; we chose the Loews Santa Monica Beach Hotel http://www.loewshotels.com/Santa-Monica-Beach-Hotel since it was closest to the pier – and across the street from the beach.

The city in the movies

Santa Monica is around 20 minutes east of Hollywood, making it a frequent backdrop in countless television shows, films and even video games (celebrity sightings are common, too). Listed below are just a few productions with scenes filmed here:

Plan your visit at the official website for the Santa Monica Convention & Visitors Bureau.

The Hindu Festival of Colors happens on March 8. Enjoy this celebration of spring at home with these fun ideas.
Read more
You