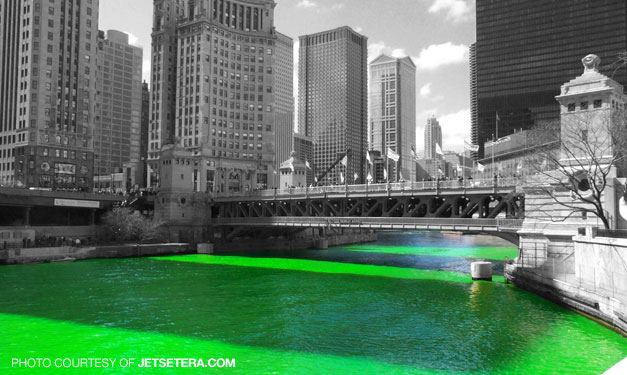 Here in southeast Michigan, we’ve got Paddy’s Day fun aplenty at a pair of iconic events – the annual parade in Detroit’s Corktown neighborhood and, hot on its heels, an Irish extravaganza in Royal Oak. But what if your family is itching for more? Well, turn your gaze to the Windy City, home to one of the biggest St. Patrick Day’s blowouts around.

Turn the holiday into a veritable vacation by heading to Chicago the third weekend of March for a jam-packed, footloose weekend of family fun.

There are holiday-themed festivities throughout the month, but the ultimate celebration lands in town early morning on that third Saturday of March.

The Chicago St. Patrick’s Day Parade experience gets its start around 10 a.m. Head down to the Loop area to watch as boats unload some 45 pounds of green dye. Yep: They dump it right into the Chicago River, turning the entire waterway a brilliant emerald hue.

The tradition dates back to 1961, and organizers today say the dye’s formula is a secret (they note leprechauns may be involved) – but is environmentally friendly. On the parade’s official site, they add, “This spectacular transformation ranks right up there with the parting of the sea by Moses and the Pyramids of Egypt.”

Join in the parade

After that mini modern miracle, for more green-day fun, travel south to the corner of Columbus and Balbo drives for the start of the parade, which steps off at noon. The route stretches north alongside two large parks, starting at Grant and then ending at nearby Millennium Park at Monroe, just past the Art Institute of Chicago.

You’ll want to find your place along the parade route early, since as many as 400,000 turn out to see large floats, bands and more make their way through the three-hour event. Parking spaces are limited, so using public transportation is both easy – and highly recommended.

Dress warmly, too; the parade goes on, come rain or snow! Snacks are a wise move, as well, due to the length of the parade (don’t want to lose your spot).

Once the parade is over, or once you’ve had your fill, there are plenty of holiday events throughout the city to keep your family busy.

That Saturday, you also could consider getting your own private Instagreeter tour of Chicago – a fun, free, hour-long walking intro to the city. You can make it if you skip the parade a bit early (these tours run 10 a.m.-3 p.m. on Saturdays). Connect with a guide by going to the Chicago Cultural Center (at the corner of Randolph Street and Michigan Avenue, just across the street from Millennium Park).

If you’re still in town Sunday, make it a point to hit Navy Pier. There’s free Irish music and dancing at the Family Pavilion Stage. Hours vary, but show times range from roughly noon to 4 p.m.

To start planning your Irish getaway, visit Choose Chicago – and get an insider’s view with a few FAQs over at the official St. Patrick’s Day parade site.