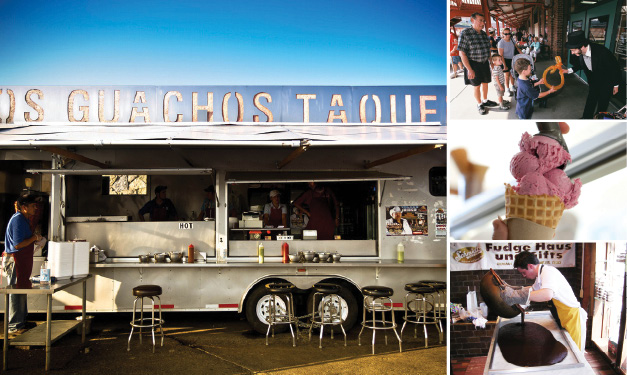 For a unique way to explore a city, why not make food the focus of your next vacation? Just three and a half hours south of metro Detroit and much of southeast Michigan, Columbus draws families with its zoo, hands-on science center and water parks, but it also has a variety of food hotspots. In fact, you could center your getaway around your taste buds. Here's what to do – and taste!

German immigrants started settling in one Columbus neighborhood back in the 1840s. After going through a period of decline in the 1950s, the neighborhood began rebuilding and preservation efforts followed. Today, the entire 233-acre German Village district is on the National Register of Historic Places. And for good reason – the cobblestone streets and quaint shops make you feel like you've stepped back in time and even to another country.

To get a taste of hearty German favorites, visit Schmidt's Restaurant und Sausage Haus and try the buffet. But don't forget to save room for dessert. Their famous half-pound cream puffs have received nationwide attention, even before they were featured on the Travel Channel's Man v. Food. You can try to down one all by yourself, but I suggest splitting one with the whole family.

There are several other bakeries and restaurants tucked in and around German Village, but after asking around for favorites, people kept mentioning Pistacia Vera. Called a "dessert boutique," the French pastry shop offers the expected treats like chocolate-filled croissants, eclairs and brioche, but I couldn't take my eyes off the colorful macaroons. Not to be confused with the coconut-packed macaroons, macaroons are delicate meringue cookies. Pistacia Vera offers an assortment of unusual flavors like lavender orange honey and strawberry amaretto. I picked out a variety to munch on back at our hotel (and let me tell you, I was surprised that my favorite kind was grapefruit – the citrusy flavor even beat out the chocolate chunk pistachio cookie, but just barely).

For a more contemporary feel, head to the Short North Arts District, where you can find a variety of fusion restaurants, bistros and cuisine from around the world. Lit-arches line the street, making it walkable even after dark. And don't worry: The area's artistic vibe and busy nightlife is also family-friendly.

When we stepped into an Italian restaurant, Marcella's, there was a mix of people dining, including plenty of kids. Since we'd already been eating throughout the day, I chose an appetizer for dinner instead of an entree. The braised veal meatball came in its own cast-iron kettle and was the perfect amount, but I must admit that the pizzas I saw going by looked tasty, too.

I didn't have any trouble finding a parking spot with the metered slots along the street, although there are lots nearby and valet service. Note: You can make reservations at many of the restaurants, but since there are plenty to choose from, you'll still be able to sneak in most places even if you haven't called ahead.

Billing itself as "35 Distinct Personalities. 1 Place," the indoor/outdoor North Market packs a world of tastes under one roof. The downtown market has the expected farm-fresh produce and bakery stands, but it also has Indian, Mediterranean and Japanese cuisine – even "A Taste of Belguim." What's fun about visiting the market is that instead of getting a full meal, you can buy a sample here and a taste there of a variety of foods.

But no trip to the North Market is complete without a stop at Jeni's Splendid Ice Creams. I usually don't like ice cream, but Jeni's is in a category all its own. The Queen City Cayenne flavor laces a hint of spiciness into chocolate, while the salty caramel scoop balances out sweet with savory. There are always seasonal flavors available too. When I visited, they were offering sweet potato, toasted marshmallow. Delicious!

Let someone else lead the way – and even do the driving – on a Columbus Food Adventure. On the tour, you'll explore the city while visiting some of its best eateries and culinary finds.

There are several tours to choose from, including an Alt Eats, where you can sample delicacies from Somali, Vietnam, India and even Zanzibar. A walking tour of the Short North, which includes a discussion of the area's history, an All Dessert Tour to satisfy your sweet tooth and seasonal choices, like the Taco Truck Tour.

You can arrange a private tour, too, or become part of a group (there's a maximum of 14 in these public tours); tickets start at around $45 per person and the adventure lasts around three hours. Columbus Food Adventures founder and guide, Bethia Woolf, carefully constructs the tours so you get just the right amount of food – pacing your mini-meals so that you won't feel too full, until the end.

The North Shore walking tour may work for younger children, but the other tours, requiring a trip in the van, are only available for older children (the van can't accommodate car seats or strollers). My kids, ages 7-12, loved the experience – we sampled a tummy full of tacos.

Growing up is a beast! We've rounded up some lessons and activities to try with kids after watching Turning Red.
Read more
Advice

How busy moms can really — and should — make time for themselves.
Read more
You