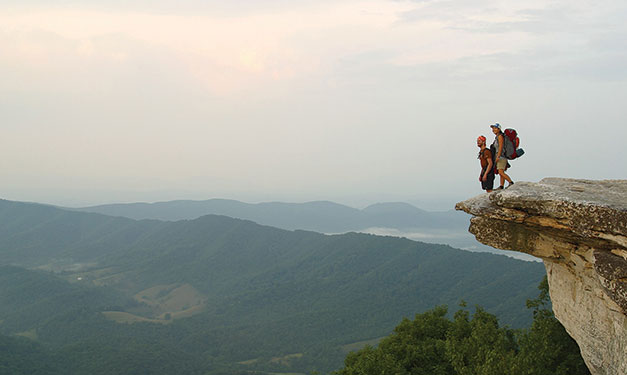 Winding over 2,180 miles through 14 states, the Appalachian Trail draws millions of visitors each year. For families looking to hike part of the "A.T." – as locals call it – Roanoke, Virginia is a primo starting point.

Standing atop Mill Mountain and visible throughout the city, the Roanoke Star is almost 100 feet and illuminated at night with some 2,000 feet of neon tubing. Constructed in 1949, it began as a Christmas decoration, but residents liked it so much, it remained lit all year. Today, you can take your kids right up to the star where there's an overlook deck that offers views of the entire valley.

You could easily spend the day at Mill Mountain. There are hiking trails crisscrossing the mountain. One trail is an easy walk from the star/overlook to the Mill Mountain Zoo. This compact space holds 175 animals, including snow leopards, red pandas and wolverines. No visit is complete without a trip around the complex on the Zoo Choo, a miniature train big enough for kids and adults. Click here for current time and price information.

Recently renovated, the Center in the Square complex houses several museums and aquarium exhibits you can see for free on the ground floor. The Science Museum of Western Virginia on the fourth and fifth floors has exhibits where kids can become a weather reporter or a scientist. But perhaps the biggest draw is the enclosed Butterfly Garden that holds 300-500 of the flying beauties. Click here for time and price information.

From here, walk a half-mile railwalk, which has interactive exhibits about the city's tight ties to the railroad. Kids can touch a button to blow a train whistle or play with train signal lights. The Virginia Museum of Transportation has large collection of diesel train engines kids can climb into – or spy miniature trains working their way along the tracks in displays. Click here for time and price information.

Go more modern at the Taubman Museum of Art. You can't miss the steel-and-glass structure, whose peaks jut up between other buildings. Entry is free and includes a large art collection upstairs – and a ground floor where kids can make their own creations in the Gallery ART Workshops area.

Plan a day to hike one of the A.T.'s most photographed spots: McAfee Knob, just outside of Roanoke. The rocky outcropping offers a panoramic view of the valley and begs you to take a pic. The eight-mile hike (round-trip) has a manageable trail that takes about two-and-a-half hours to get to the summit, depending on your pace. It doesn't get too rocky or strenuous until the last section. You might want to start in the morning and pack a lunch to have at McAfee Knob. Note there's only one rustic bathroom along the trail.

If your kids aren't up for a longer hike, you can drive through the Blue Ridge Parkway and stop at the Explore Park, which offers 14 miles of trails. Or you can simply make pit stops along the parkway at places that look interesting to your kids. For example, if you head north to Botetourt County, there's a short hike to the Roaring Run Falls and the Roaring Run Recreational Area.

Finish off a day of adventures at one of Roanoke's many restaurants. For a local fave, the Roanoke Weiner Stand, in Center of the Square, has been serving up plump, juicy hot dogs smothered in chili sauce since 1916.

The A.T. has been a draw since it was first completed in 1937. Help your kids learn a little bit more about it before you head out on the trail.