With so many millions of views, we know lots of little ones are watching these clips. Do your kids watch them? 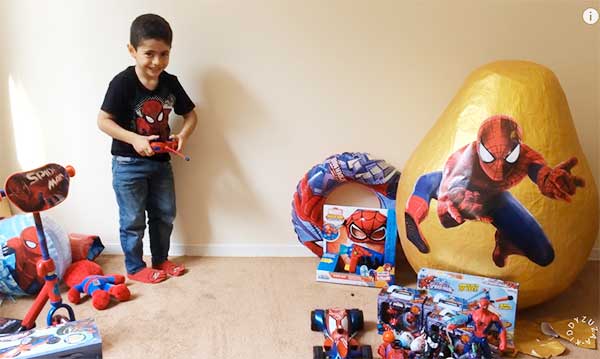 Kids’ toy review videos are exploding on YouTube and if your little guy or girl has access to a phone or tablet, you’ve probably seen at least a few.

The videos – showing anything from a simple unboxing of a toy to a more elaborate play scene involving lots of toys – get up to hundreds of millions of views each and new ones are uploaded daily. They capture children’s attention in a unique way and my kids (and many others I know who love the videos) seem truly captivated – almost hypnotized, we often joke – by them.

Here are six crazy-popular clips that will give you (and your kids, if you let them watch) a glimpse into what these viral videos are all about. Warning: Your kids may become hooked!

FunToyzCollector, formerly known as DisneyCollector, has more than 6.7 billion cumulative views channel-wide with its videos showing the unboxing of Play Doh toys, Shopkins and more. The mysterious woman who makes them (viewers only get to hear her voice and see her cutely-painted fingernails as she opens toys) is estimated to earn between $1.3 million and $20.1 million per year from advertising on her channel, AdWeek reports. In this video, the host uses a sparkly Play Doh set to make dresses for Disney princess dolls.

Kids love Kinder Surprise Eggs – the hollow chocolate eggs with tiny mystery toys inside, currently banned in the U.S. – so it’s easy to see why this video strikes a chord. Here you’ll watch a little boy open a giant, DIY surprise egg made of paper mache that’s filled with tons of Spider-Man toys.

The DisneyCarToys channel, hosted by “Sandra” and a guy dressed as Spider-Man, has more than 2.6 billion cumulative views. They make toy review videos, doll parodies, surprise egg openings and more. In this video, kids get to watch Sandra play with a My Size Elsa doll and they’ll be surprised when they see the crazy shenanigans these two get into, including a food fight.

This channel where two kids try out different types of candy (don’t worry, they encourage kids to brush and floss their teeth!) has a total of more than 308 million views. In this video, watch as kid hosts Jillian and Addie try out sour candy Warheads – in ice pop, chewy candy, powder form and more. Kids will love their hilarious expressions as they try each new thing (even Dad joins in the fun on this video).

A kid named Evan makes these toy review videos, which have more than 1.3 billion cumulative views. In this video, watch as Evan plays with an Angry Birds Space Mash’Ems set. Kids will love the crazy special effects in his videos (including a huge Angry Bird pig showing up at Evan’s front door and Evan blasting into outer space with his Angry Bird buddies).

This channel has more than one million subscribers and shows two young girls opening up various cool new toys, including Baby Alive dolls, surprise eggs and the ever-popular Shopkins. In this video, the kid host unboxes a new Shopkins playset, introduces viewers to each Shopkin and then plays with the set.

Are your kids watching toy review videos? What do you think of them? Tell us in the comments.