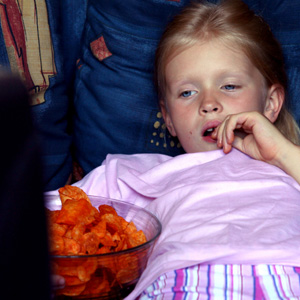 It can be tough to keep that tyke away from the TV all day, every day. Work, laundry, dinner and life sometimes overwhelm even the most organized parents.

If you do decide to put the television on for your toddler, though, quality content counts, according to a recent study published by the American Academy of Pediatrics.

Half the toddlers – the intervention group – received instructions to view TV shows with educational and pro-social content. Parents of the control group, meanwhile, were not asked to change their kids’ viewing habits. And neither group reduced the overall amount of TV watched each day. Evaluations took place at six and 12 months for all children involved.

After studying the two groups for one year, researchers concluded that the quality of television programs influenced the behaviors of preschool-aged kids. When pro-social, education-oriented shows became the daily TV diet, it reduced their aggression and positively affected their behavior, researchers found.

Other facts and findings

Past studies also seem to support these findings. A 2006 national survey conducted by the Henry J. Kaiser Family Foundation found 66 percent of parents said their children imitate positive behaviors witnessed on television shows. Yet only 23 percent said their kids exhibited negative behaviors such as kicking and biting.

There’s a note of caution, too, over moms’ and dads’ perception in such studies, as noted in a recent New York Times’ Well blog post on the AAP study.

“The new study has limitations, experts noted,” says NYT social-trends writer Catherine Saint Louis. “Data on both the children’s television habits and their behavior was reported by their parents, who may not be objective.”

The takeaway for parents

On the surface, the idea that there’s a tie between TV program content and kids’ behavior makes sense to Eric Herman, a clinical psychologist at DMC Children’s Hospital of Michigan. He correlates it to a better diet: If we don’t eat junk food, we’ll feel better.

However, he stresses a deeper issue is that kids spend too much time in front of the TV and computer and not enough time with family or friends. To that point, the ’06 Kaiser study found that 83 percent of children younger than 6 years old use screen media in some way.

But by spending time with loved ones, we truly learn our social skills, Herman says.

“I’d rather pick time with mom, dad, a grandparent or a friend,” he says.