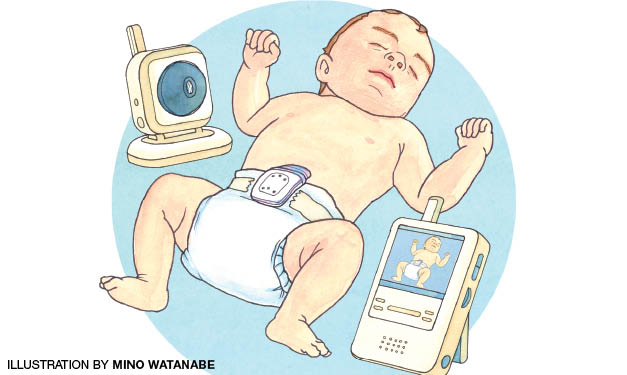 Modern moms are using technology to get back to the basics: breast-feeding, monitoring and safety. Here are some tech tricks that are making baby care easier, and in some cases, cheaper too.

When Priya Nembhard was breast-feeding her youngest, Liam, she had one problem: Where to pump when she left the house?

"I had a lot of difficulty finding clean places to breast-feed or pump," she says. "And there were no resources online."

Nembhard, who lives in New York, and a mom friend came up with MomsPumpHere.com, which uses the GPS from your smartphone or tablet to find the closest location where a mom can pump/nurse in private. Log on to the site with your mobile device to find more than 200 locations in major cities throughout the United States. The site also allows moms to add their favorite pumping spots to the database.

It's no longer necessary to shell out big bucks for a video monitoring system. Now, you can download an app on a smartphone or tablet, and the device's camera will transmit your baby's image to a second device – or let you listen in to make sure the young one is sound asleep. Here are a few of the best:

Best Baby Monitor: Lets you monitor by video and speak to baby with a second device. Sends alert call if a sleeping baby wakes. Plays lullabies. $3.99 on iPhone, iPod touch or iPad.

iSitter: Monitors audio in real time and camera images every 30 seconds with two devices. Sounds alarm if parent's device is disconnected. Free on iPhone, iPod touch or iPad; upgrade ($2.99) to get rid of ads.

Baby Monitor. Put your iPhone by sleeping baby and, when the app detects noise, it calls you so you can listen in. $4.99.

According to the U.S. Centers for Disease Control, around 4,000 infants die each year for no obvious reason. About half of those deaths are due to SIDS when a child is asleep.

For parents who want a prevention boost, try Snuza Hero, a device that clips onto baby's diaper to monitor movement at night. If there is no movement for 15 seconds, the monitor vibrates gently to rouse baby. If no movement is detected after five more seconds, an alarm will sound. $102.

It's not here yet, but it's on the horizon. Huggies Brazil is testing a clip-on humidity sensor that attaches to a diaper, senses when it's wet and activates an app to tweet the parents that it's time for a diaper change. This product, tentatively called Huggies TweetPee, is in a testing phase and is not yet for sale.