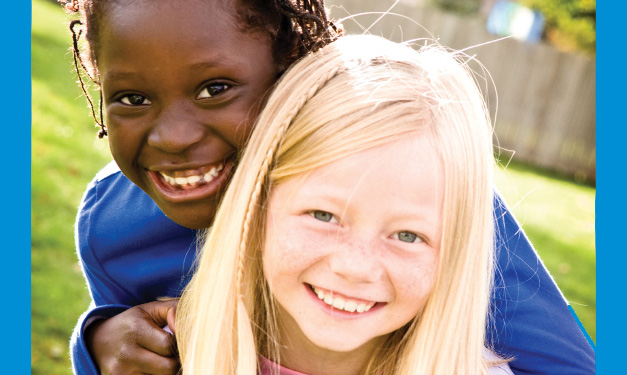 The Lovell family home seems to be the gathering spot for kids in their South Lyon neighborhood. Mom Mollie Lovell says her school-age kids Carson, 10, and Lucy, 7, have friends over almost daily. Little Delaney, 2, is a bit young to join the big kids, but will when the time is right.

"We’re the house that they usually congregate at," says Lovell, who stays at home with the kids while husband Tony is at work. "We have a big backyard and the boys will play baseball there – or, when the weather isn’t good, they will go down to our finished rec room."

One would expect that a house full of a half-dozen or more visiting kids would get rambunctious, but control is rarely an issue in the Lovell home. How do they do it?

The house rules are simple: "I generally tell them that we have rules in our house, and everyone has to abide by them – and I will enforce them with visiting kids as I do my own kids," Lovell says. "We’re pretty straightforward, and everything is in black and white.

"They know what we expect here and are told if they don’t like it, they are welcome to go home." So far, there have been few takers.

"When you are talking to 5- to 11-year-olds, you need to be very concrete, very direct and matter-of-fact. They need to know what the rules are – and they can be conveyed in a friendly way, but you must follow through," Kester says. "Discipline is usually not an issue; children this age are usually good at other people’s homes."

If parents anticipate a problem, they can let the kids know ahead of time what they can and can’t do, Kester says. Parents need to set the expectations and limitations and tell the children what the consequences will be if they don’t follow the rules.

Unlike play dates for younger children, older kids can have friends over and the parents don’t have to be their entertainment, Kester adds.

The people your children choose as friends can give a parent some insight into their kids. "It’s interesting to see who they gravitate toward," Kester says. "You may want to hang out with them a little and get to know the new kids, find out what they like and what they’re all about."

When a new friend does show up at the house, make sure you have their contact information, such as phone number, parents’ names and home address.

That isn’t something the Lovells need to worry about. Not only have their kids grown up together in the neighborhood, but the parents are friends, too. "We know the kids really well, and we know their parents really well."

She’s had to draw the line, though, on the easy accessibility of the basement rec room. The door to the room now has a lock, and the kids have to come to her for the key if they want to hang out there.

The boys know the rules for using the room and must restore order to the rec room before they leave.

"I expect them to have made some sort of an effort to make it look like it did when they came in, and I encourage their friends to help," Lovell says. "And they’ve gotten really good at it." In fact, she’s overheard Carson saying, "Hey guys, we can’t go outside yet, we have to get this cleaned up."

Kester agrees and says parents should tell their children and their guests "You can play, but before you leave, you will pick up everything – that’s one of the rules for hanging out here and playing."

Certainly those are words near and dear to any parent’s heart!