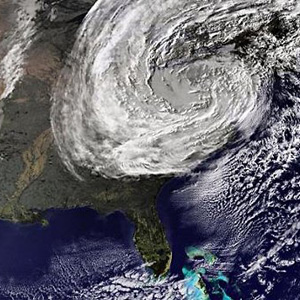 Thankfully, the most we felt in Michigan from hurricane Sandy was some high winds, lost power and really big waves out on the Great Lakes. You may, however, be dealing with kids who are or were frightened by what they've seen or heard regarding the devastating storm and its aftermath – including more than 100 deaths, extensive damage and some scary pictures of menacing skies.

Whether it's a major storm, tornado or any other natural disaster, to help worried kids understand, here are some tips on how – and how much – to discuss.

When your child sees images of houses destroyed, it's likely that she will soon think that her house may be next. The American Psychiatric Association says to reassure kids that the big storm happened very far away and that they are safe at school and at home.

2. Be a composed example

Your children will likely mimic your reaction to events such as these. Remain collected when talking with them directly about the disaster, Parenting magazine says. If you're discussing the latest news with other adults, try to keep your conversations calm, too. Your kids will take note.

Ask kids what they are afraid of – and then calm them with facts, says parent advice site ModernMom. Let them know that big storms are rare and that hurricanes lose nearly all their strength before they reach Michigan, and that meteorologists and our technology can warn us before these storms make landfall.

4. Don't give more details than necessary

If your kids are too young to remember Katrina, don't bring it up just to make a comparison to Sandy, notes the Child Mind Institute. Don't describe death and destruction in more detail than necessary. It will leave too much to their imagination, causing only more anxiety.

5. Be reassuring, but be truthful

Don't tell kids that a storm like Sandy won't ever happen again – even if you think it may comfort them, the American Psychiatric Association says. They ought to know that storms like this are a part of nature.

6. Use your judgment about watching TV news

We know that 24-hour news coverage can often sensationalize big events like Sandy. Live anchor reports of the devastation and the brutality of nature can be a little intense for young ones. If you know your kid is easily impressionable, consider limiting their exposure to such news coverage, says Parenting magazine.

7. Consume the news together

If your child can handle the television coverage, watch it with them, says Scholastic. Ask them to share their thoughts and concerns. If the TV is too intense, try reading the newspaper together, which can be a great learning activity on many levels.

8. There are people to help

Reassure your children that local and federal governments have plans for what happens during big storms, adds ModernMom. Use the time to remind yourself and your family about your own plans for potential emergency scenarios.

If you're waiting out a really bad storm, once you're in a safe part of the house, just sit back and enjoy the time inside, says Parenting magazine. Play some board games or create your own fun to distract yourselves from the nasty weather.