I Hate Being a Procrastinator 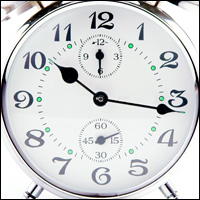 I am a born procrastinator. It’s not just a bad habit, I believe, it’s the way I’m wired. I mean, do I procrastinate because I’m a writer and used to living by deadlines? Or am I a writer because the only thing that gets me motivated in the world is having a deadline? I’m thinkin’ the latter is more likely.

Last summer, however, it became apparent how much trouble I could get into as a procrastinating parent. In front of the school each day in May and early June I heard other moms talking about all of the plans they had made for their kids’ summer vacations.

Ha! I scoffed silently. It’s too early to decide all that now. I feel more comfortable being right there at the edge of the deadline when I’m forced to drop everything else and make my decisions quickly and efficiently. Also, many camps charge a drop fee if you discover you can’t take the class after all. Now there’s an incentive for procrastination if ever I heard one! So I waited till the very last days of school, in 2009, to start to book my girls’ summer camps and classes.

Unfortunately, the class Suzi wanted most of all (Fame Camp, naturally!) had been canceled because not enough kids had signed up for it (oops!). I missed getting discounts for some of Patti’s classes because I signed up so late (rats!). And the worst of all was that early bird parents had already grabbed all the best community center swim class spots. We were stuck with 8:40 a.m. swim classes all summer long (ewww!). The girls were not thrilled about the 65-degree air temperature at that hour.

So this May, I decided I’d better be a good mommy and schedule their classes much earlier. So in 2010, a month and a half before the end of school, I booked them into a nature center camp, Suzi’s beloved Fame Camp, Patti’s dance camp and nabbed coveted 10 a.m. swim class slots at the pool!

The only problem was, well, sometimes you just can’t beat your own internal wiring. Several weeks into summer I was looking at my calendar and saw an old notation about a swim class.

Sure enough, on that sad Tuesday, I learned that the girls’ swim classes had begun on Monday. We had already missed two classes!

I tried to explain to Patti how my feeble mind works, that since I’d booked the classes six weeks ago I had forgotten exactly when they started, but she just stared at me with annoyed incomprehension.

Wednesday morning I had to take them to the pool and get them into their classes late, sheepishly apologizing all the way that I had forgotten the start date.

All I can do now is hope that I’ve learned great lessons over the past two summers and 2011 will the best summer ever. (I hope!)