I Hate Losing Track of Technology 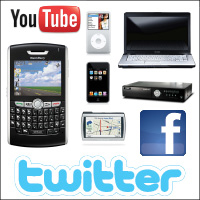 In the two years before I became a mom, I shed my corporate work, taught English as a Second Language to lovely housewives and, at home, I nested. It was a very low-key time in my life. It was also a time when communication technology began to boom and change at warp speed. But I didn’t know. I was transitioning to happy-homemaker-dom. I had a little four-pound cell phone, and I was happy.

During my daughter’s first two years, I stayed home and wore out the knees of all my jeans, clambering around the floor in low-tech bliss. Then we joined a parent-tot class and I rejoined American culture. Many of the moms, who were younger than I, talked about things I knew nothing about – computer programs, websites, even smart toys! They had mobile phones that they took photos on and even typed on.

I struck out to learn about these curious phones and then found my chance to use the other moms’ whippersnapper lingo. When a mom fidgeted with some gadget on her belt loop, I asked her if that was a Blueberry.

"You mean Blackberry?" someone said, butting in.

"No," she said, smiling charitably. Then, in a half-whisper, she added, "It’s my insulin pump."

I had a lot to learn.

I’ve been doing pretty well. I bought a 2nd generation iPod back around 2005 and used it all the time, though it’s a little annoying when the earphone lines get tangled up in my reading glasses chain.

This May, I got an iPhone and joined the world of texters! A few weeks ago I finally broke the chains that bound me to the 1980s – I traded in my VHS tapes for a DVR!

But I still make mistakes. To solve the cable/glass chain problem with my iPhone, I recently bought a cheap wireless Bluetooth ear bud thingy, only to learn that it’s just for phone use. I can’t hear my audiobooks on it while I walk the dog (and get his leash tangled in the iPhone cord!). Still learning.

But it’s not really such a big deal when it comes to consumer products. The scary part is, once my kids are a little older, will I ever get a full-time job again?

Recently I started thinking about it. I used my little pink netbook to search for jobs on the web (see? I’m not hopeless!). Problem was, when I found jobs that required the skills I have, they also expected skills that seemed to be in some western Martian language. For example, one job for a writer wanted a writer with experience in Facebook, Blog, Twitter, YouTube and an understanding of metrics, analytics and optimization.

I’m guessing that’s not quite sufficient.

So I think I have a little work to do before I hit the job market again. The good news is my older daughter is almost 10. That means she’s just about old enough to teach me all the technical stuff I need to know.