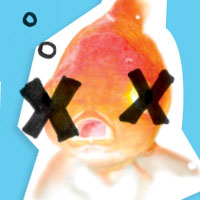 I learned about the depths of mom guilt last fall with Sylvia.

Sylvia was a beautiful little fantail goldfish we bought to keep our two run-of-the-mill goldfish company. Sylvia had a splendiferous tail that put her fish sisters Shimmer and Stella to shame. You could tell she was of quality stock. She cost $1.37 while the other two were 11 cents each.

Now back then, I considered myself a great healer of goldfish. Once Stella got so sick she was swimming sideways. We thought she was a goner. I warned my girls that she was going to die. Seeing their sad eyes, though, my mom guilt kicked in and I jumped on the Internet to see if I could find a cure. I found a fish website that listed symptoms just like Stella’s. There was a product that would cost a thousand times Stella’s value and require five days of treatment. But I’m a mom, so I bought it, treated her – and she survived.

My girls thought I was wonderful! Mom could do anything! Even bring a fish back from the dead!

When lovely Sylvia got sick, I knew saving her would be a snap. And of course I still had a few dozen courses of the treatment. But it didn’t work. A few days later Sylvia was floating at the surface at times. And now she had white bumps on her body. I took her away from the others and plopped her into a bowl. She wouldn’t eat. She barely swam.

The next day I searched the Web and took water samples to the pet shop looking for an answer. Nothing. That night we held vigil over the fish tank.

I noticed a long hair-like thing hanging from Sylvia. When I looked it up, I found that Sylvia had a fatal disease. The experts said that the best thing to do was "destroy" the fish. I didn’t tell Patti the bad news. When I put the girls to bed, she asked me to go to the store to get medicine. I felt terrible.

"Honey," I said, "I don’t think there is medicine for this. Besides, Daddy isn’t here. I can’t leave you girls alone."

"Yes you can," she implored. "Just leave after we go to sleep."

That night, six days into the deathwatch, I decided the fish had to be euthanized. I couldn’t go on watching the still goldfish, hoping she’d finally passed on, only to see her wiggle. Although I wanted to be a genius healer for the girls, it wasn’t really fair to the poor fish.

I had a brainstorm. Instructions always said never to put cold water into a tank because the shock would kill the fish. So I said my apologies to Sylvia, shoved a handful of ice cubes into her bowl, and ran off to bed.

After a night of guilty dreams, I found Sylvia motionless in her bowl. But as I said goodbye, she wiggled some more! Instead of putting her out of her misery, I had just made her suffer for an extra eight hours!

Does the guilt and shame never end!?

After the girls went to school that day, Sylvia wiggled her last. Patti cried when I told her, but she didn’t seem to blame me. Patti didn’t want me to flush her, so I gave her an honorable resting place – a little gift box to bury her in. I saw the last of Sylvia, then, but the mom guilt lives on and on.