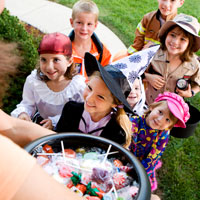 When I think of Halloween, the first image that comes to mind is a black-and-white photo of me and my sister, sitting with our legs straight out on the floor, surrounded by piles of candy. My sister is half out of her homemade bunny costume. I’m a ballerina with make-up that’s all smeared because I’m frantically jamming candy in my mouth, as evidenced by my bulged-out squirrel cheeks.

But that was then. Now I’m the mom on Halloween, which is a lot of work – and a lot of fun.

I’m no seamstress, so we have always bought our girls’ costumes. When they were tiny, we got those warm fuzzy pullover ones. Patti was an adorable little lion her first Halloween. When they were older, they picked their own. One year Patti was Dorothy from the Wizard of Oz and Suzi was the cutest witch ever.

Finding pumpkins has become a tradition. A couple weeks before Halloween, we head to a pumpkin patch with a fake graveyard and six-foot-tall roaming witch. Suzi seems drawn to the scariness initially, but ultimately has to be led by one hand as she covers her eyes with the other. I can’t blame her. Even I get a little creeped out by that cackling green witch, but it’s part of the spooky fun.

Dad gets to take over when it’s pumpkin carving time, and the girls love reaching down into the icky, gooey pumpkin innards to fish out the seeds we can bake up later.

Our 9-year-old daughter Patti does not hesitate to tell me the best part about Halloween. Believing herself to be a neglected child because I refuse to let her eat candy all day, Patti just loooooves the free piles of candy!

Suzi is 7 and loves the theatricality of it all. She has been a Disney Princess two years in a row and insisted on topping each costume off with a big old fluffy wig. On Halloween night she gets so excited that she dashes from house to house so we can barely keep up with her.

And why not? What could be better than a holiday that allows you to dress crazy, walk up to strangers’ doors demanding candy and they fork it over while telling you how great you look?

As the day approaches this year, however, Suzi is not filled with her usual enthusiasm for the holiday. She thinks it’s too scary. I’m not quite sure what bothers her more: walking in the dark, never knowing when some monster is going to show up, or being at school and having a ghoul sitting beside her in class. If she had it her way, everyone would dress up as a princess or kitten – or maybe a flower.

Unfortunately for Suzi, big sister Patti is growing out of the cute-costume stage and wants to be a vampire. Suzi will be skipping up and down the sidewalks as Dorothy, decked out in with braids, gingham dress and a little Toto, too. She rejected my offer to put red magic marker bite marks on her neck so their costumes would work together, but that’s OK.

As chief holiday organizer, I’ll be overseeing the dressing and make-up and school party and buy candy for the trick-or-treaters. But I get payback by watching them enjoy every second of the night. And later, I’ll hunker down on the ground with my camera and take a picture of them looking just like 6-year-old me – in their rumpled, half-destroyed costumes, legs straight out on the floor, surrounded by piles of candy.