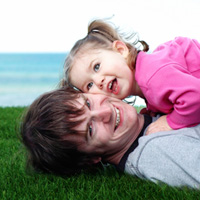 I used to notice men in public taking care of their kids who seemed to wish they were anywhere else. I would wonder why these Temp Dads didn’t just give it up and go back to the office.

But then a couple years ago I had an epiphany – at least most modern dads really try.

I saw such a dad with his kids at the local pool. Suzi sat at my right on the poolside bench, all wiggly in anticipation of her swim class. The dad sat at my left bellowing business cliches into his tiny cell phone.

"We are going to reorganize to insure world-class customer service," he roared, as his daughter tap-danced near the pool’s edge. My inner lioness crouched ready to spring and grab her, but the swim teacher appeared and swept the toddler from the precipice. The father never budged, and didn’t miss a beat of his loud sales pitch.

When the class started, Pool Dad continued his rant so loudly I escaped to the other end of the bench. He reminded me of my husband, who takes our two girls to the park, then spends the whole time doing business, barking into his cell phone.

But moments later I heard the man’s voice in full baby talk mode. As I was gnashing my teeth over the failing of modern daddies, he had hung up and scooped his other daughter, an infant girl, out of her stroller. "You just wuv to see big sister in da pool, dontcha sweetie?" he said. Then he cooed at another little girl in her mom’s arms, "You are just the happiest baby I’ve ever seen, aren’t you, cutie pie, aren’t you?"

Oops, I guess I pegged him too soon. Pool Dad spent the rest of the class entertaining the moms and chatting up the babies. I forgot about his phone call and admired him for the sweet, attentive daddy he turned out to be.

And shame on me for being so judgmental. After all, he was here, wasn’t he? And how great for his daughters to see that men can be nurturing, too.

It wasn’t a stretch to imagine how different a father could be. I loved my dad, but he was a workaholic who never helped my mother by taking us to the park. Unthinkable! He never did anything at home. My mother didn’t have outside interests – she cared for the four of us every minute of every day without a break. Dad’s purpose was to work at the office and demand quiet at home.

My husband has been very supportive of my work and actually encourages me to get out of the house to write on weekends. When Daddy’s at the helm, I come home to find him absorbed in his work. Suzi’s watching TV without guidance. Patti’s on her computer. The kitchen is a mess and there are signs that the girls ate an unhealthy lunch late in the afternoon.

But you know, they’re alive, uninjured and smiling, so who am I to complain?

Often I’ll find out later that he took them bowling or kite flying, too, the type of fun adventures I (guilt, guilt) seldom make time for. And how many times have I seen my macho husband wiping tears away when the girls are at their wisest and most adorable?

I believe most modern dads try their best to support their wives and kids like never before. So for that, I say Happy Father’s Day to all of you helpful dads out there. We don’t always say it, but we appreciate you!

Christmas Eve is one of the most magical nights of the year. The excitement of the holiday is reaching its peak, and children are...
Read more
Sponsored Content