I Love My Little Ham 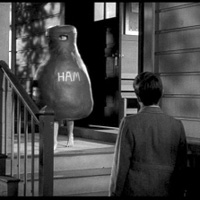 Our 7-year-old Suzi has always been a little actress. For example, she doesn’t tell me she’s hungry. No. Instead her whole body doubles over and she claws at her stomach when I tell her it’s too close to dinner to eat a snack. "But I’m starving!" she declares, body wracked with gnawing pangs, eyes so sad my own stomach flutters with guilt at the sight. But I recover.

"Sorry, honey, but don’t worry. Dinner will be ready soon," I say.

Suzi trudges off stage, er, I mean out of the kitchen, like an ashamed soldier limping away from a lost battle. Meryl Streep can just eat her heart out.

At the age of 3 and 4, Suzi sang Shirley Temple and princess songs to anyone who asked.

Later my husband and I learned, with a blend of pride and stomach-bending discomfort, that our 45-pound thespian could get a whole audience to eat out of her teeny little hands.

It was at her pre-school graduation performance (I know, what’s THAT about?). We sat in the back like the shy parents we are. But from there we could see that most of the parents were watching Suzi, who sang louder and danced more vigorously than the other kids. We were amazed to see them whispering and pointing at her.

Sadly, Suzi didn’t come off stage triumphantly that day. Rather she burst into tears, yelling at my husband because he had been videotaping the event and hadn’t been able to clap for her. The nerve!

Last year at a family summer camp, Suzi was the only kid willing to do a solo act. Other kids performed uncertainly in small groups before the hundred or so assembled campers and parents. With no warning, Suzi belted out Hannah Montana’s theme song – not a portion of the song, but the whole song! She was fantastic, but I couldn’t wait for it to be over. I don’t think I breathed the whole time. As she finished, there was a second of silence in which everyone seemed to be digesting the experience. Then, riotous applause ensued. I cried. I cheered. I couldn’t believe it. Suzi smirked, bowed calmly and walked back to her group. Then, of course, she returned for a curtain call.

Apparently her need to perform washes over into recess at school, where the only games she likes to play are Fashion Show and Making a Movie.

Unfortunately, sometimes Suzi’s performing skills are used for nefarious purposes. A couple years ago she lost her third pair of glasses. Over the two weeks they were missing, I asked her repeatedly, "Are you sure you don’t know where they are?"

"No, Mommy, I promise!" she would vow, her eyes heartbroken at the hint of an accusation. "I don’t know where they are."

I then offered my girls a $5 reward for the glasses. Sensing her big sister’s enthusiasm for a competition, Suzi jumped up, ran straight to the spot behind the toilet where she had hid the glasses and returned beaming with pride over "finding" her specs. But once she saw my shocked face she realized her mistake. Her glorious smile turned into a sad little frown. She was caught.

As angry as I should have been, I laughed out loud. Perhaps it was a relief to finally see the evidence of how she plays me. And now I know what to look for.

Of course, Suzi learned something that day, too. A true thespian must never break character and never, ever veer from her script.